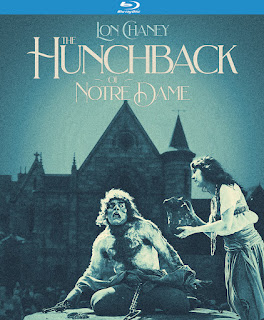 When it comes to stars of the silent era few transformed themselves figuratively and literally like Lon Chaney Sr. He played a wide range of now iconic characters including the Phantom in The Phantom of the Opera (1925) and the tragic Quasimodo. Charles Laughton would later play the character and while his take is different and has its own quality, it's hard to compare to Chaney who brought something incredible to the role. At the time the movie was one of the most expensive, costing over one-million dollars (a lot in the early '20s) but brought in over three-million at the box office. Based on 1831 novel by Victor Hugo, Hunchback tells of a misunderstood person named Quasimodo (Lon Chaney) who is an outcast in Paris and the performer named Esmerelda (Patsy Ruth) helps not only save by redeem the poor man.

Huge in scope and scale, Hunchback of Norte Dame is on every level a marvel to behold. From the rich costumes, the highly detailed sets that breath life into the world. And of course you have Lon Chaney transforming and pushing his body to the very limit to embody the titular character. As always, Chaney delivers a heartbreaking, and wholly complex. Equally great is Patsy Ruth. Ruth like Chaney finds the core of the character and the two play off one another really well.

The movie is also paced really well which is sometimes not the case with silent films of the era. Wallace doesn't provide filler and basically everything in the film is in service to develop characters but also move the plot forward. Also, for a early film the photography is rich and composition and blocking is rather complex and interesting to look at.

The Hunchback of Norte Dame is a stagger achievement in cinema and its scary to think that without a surviving 16mm version this movie would be lost forever.

Picture: In 2023 The Hunchback of Norte Dame will turn one-hundred years old. Seeing how well over half of silent films are sadly thought to be totally destroyed or lost to time, its a small miracle that this movie survives let alone is able to get a new transfer. Kino Classics presents a 4k transfer provided by Universal Studios. I am here to say that I don't think Hunchback has ever looked this great on home video. The film of course has scratches and noise but this should not be judged harshly when you consider how old this film is not to mention what condition the original film elements were in. You can tell though how the image has a cleaner, sharper look with small details in sets, costumes and locales.  Unless an actual 35mm print can be found (thought to be lost or destroyed) I think this is the best this is ever going to look. Kino has once again outdone themselves in terms of providing a nice crisp and exciting visual presentation.

Extras: Hunchback has a nice array of extras including: A feature length commentary track with film critic Farran Smith Nehme