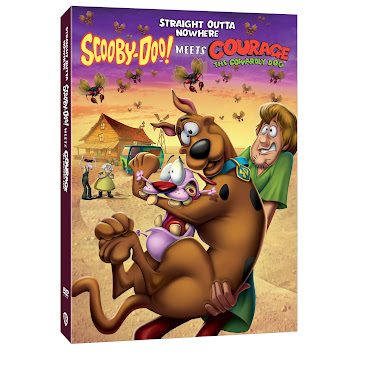 Who doesn't love a good cross over? Like a Reese's Peanut Butter Cup, its always a win to combine two already great things into one even better product. Such is the case with the event fans have been waiting for. Scooby Doo and Courage the Cowardly Dog is two beloved animated finally meet in a brand-new animated feature film.
Being a fan of both properties I was a bit nervous about how they were going to cross over both IP's in a way that feels organic and not shoe horned in. Thankfully, I think the filmmakers succeed in doing just that. The plot is one of the better straight-to-video offerings in the Scooby Doo franchise. Writer and two Primetime Emmy nominated Michael Ryan is no stranger to writing in animation having such credits as Cow and Chicken, as well as recent Scooby Doo projects including the series Scooby Doo Guess Who? Ryan does a fantastic job at not only nailing the characters (in both IPs) but also offers up a lot of great gags and very funny meta-jokes. Heck, he even sneaks in a Young Frankenstein (1974) running joke for good measure. As I mentioned above, I think Ryan is able to work both characters and their strange quirky worlds in a way that feels pretty natural. The film is of course sprinkled with references and Easter eggs from both series. It also ties in theme of bravery and being your authentic self in a way that is great for a young audience.
The voice cast is great with Matthew Lillard giving an effortless performance as Shaggy. Animation voice acting legend Frank Welker (who has been apart of the Scooby Doo franchise since the '70s) is equally great as Scooby Doo and Fred Jones. Also returning in their respective roles is Grey Griffin as Daphne and Kate Micucci as Velma. And of course, Marty Grabstein as Courage and Thea White who sadly passed away earlier this year. This marks her final screen credit.  Tying this altogether is voice director Wes Gleason who helps create a seamless voice performance from this talented cast.
Furthermore, the animation is great and I think they nailed the style of both shows perfectly. Though the movie is far from perfect I was very impressed by how it was able to really fold both shows in a fun and highly creative way. It has a nice message and it's pacing is for the most part really nicely handled. Couple this with a mega-talented voice cast and top notch direction and you have a very solid entry. Fear not, this one is worth checking out!
Picture/Sound: Though only on 720p Scooby Doo/Cowardly Dog has a nice crisp look. The colors in the animation pop and the fact that this has been upconverted from digital animation means you get a sharp look even on DVD. The sound is great as well with dialogue, music and sound design coming through nicely.
Extras: Extras include bonus episodes such as: Scooby Doo: Where Are You? Decay for a Dognapper, Scooby Doo/Dynomutt Hour (which includes Frank Welkers as Fred) The Gruesome Game of the Gator-Ghoul, Scooby Doo/Dynomutt Hour: Chiller-Diller Movie Thriller.
Posted by The Video Attic at 10:51 AM