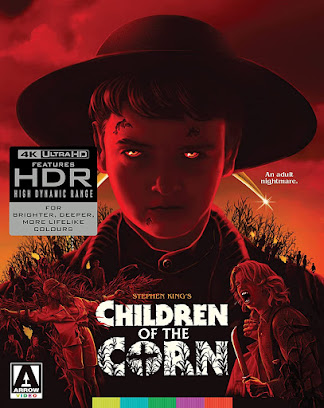 If are you curious about the changes from the story to the film I included a link to Dom's Lost in Adaptation YouTube video *spoilers are contained in the video so be warned Click HERE
In 1977 Stephen King published a short story for of all places Penthouse Magazine entitled Children of the Corn. Later the story was included in the collection Night Shift in 1978. When it comes to adaptation of King's work it ranges from the good, the bad, and the downright ugly. 1984's Children of the Corn seems to exist in this weird middle ground. Its often considered a lesser adaptation but, the film has gained a loyal cult following and, of course spawned a legion of mostly direct-to-video sequels. Critics at the time panned the film but I generally think its a enjoyable little film.
So, here's the thing: The movie does have its fair share of issues narrative wise. This ranges anywhere from horrible character development to plot holes the size of the Grand Canyon. Not to mention pretty bad child acting, dreadful narration (that isn't needed) and the less said about that awful CGI finale the better. But, I think I seen this movie just at the right age for it to totally capture my imagination. Looking back on it, I can see that director Fritz Kiersch did a decent job with a scant (even for the time) budget of about 800k. The movie looks low budget but it has some flare and flourishes thanks to some good cinematography and production design. While some of the kid acting is bad I do think Courtney Gains is fantastic in the role and I won't hear any different. Gains makes a total ham-dinner out of the role and he's truly at his best when he's going totally gonzo. John Franklin is iconic as Isaac the leader and its fun to see Linda Hamilton in an early role. Fun fact, both this and The Terminator would be released in the same year.  Peter Horton is bland and I think woefully miscast though he does try to make the role work.
Children of the Corn is clunky, its screenplay is woefully underdeveloped but it has an '80s horror charm and that right amount of so-bad-its-enjoyable kind of camp. I know I am giving it way more credit because I enjoyed this as a children (who also grew up on a farm-with corn). But, the movie is still being talked, written and re-released over three-decades later.
Picture: Children of the Corn makes it US debut in UHD. This is honestly the first time I have seen this movie outside of its Anchor Bay DVD release. I have to say I was blown away by this transfer. Whilst the grain is on the heavy side the print has been lightened considerably and the film retains a lot of sharp details. It was impressive to be able to see texture in costumes not to mention small details in the production design. Colors are brightness for the most part are also stabilized. Night scenes of course truly benefit from this new UHD transfer. I honestly cannot see how this has ever looked this good on home video.
Sound: Children of the Corn has a DTS 5.1 track. From the eerie score Jonathan Elias that booms over the credits to the creepy sound design this audio transfer is equally impressive. Dialogue comes through nicely and, in my opinion offers a pretty robust and complex track.
Extras: All extras have been ported over from the previous release and includes:
Audio commentary with horror journalist Justin Beahm and Children of the Corn historian John Sullivan, Audio commentary with director Fritz Kiersch, producer Terrence Kirby and actors John Franklin and Courtney Gains
Harvesting Horror: The Making of Children of the Corn (36mins) A retrospective piece featuring interviews with director Fritz Kiersch and actors John Franklin and Courtney Gains. In my opinion a great feature that provides some fantastic interviews.
It Was the Eighties! an interview with actress Linda Hamilton (14mins) A lively and candid interview with the star of Children of the Corn.
And A Child Shall Lead Them: Rachel and Amos Remember Gatlin A Conversation with Julie Maddalena and John Philbin (50mins) A wonderful and fun interview with both actors.
Field of Nightmares: Interview with Screenwriter George Goldsmith (17mins)
Return to Gatlin, featurette revisiting the film's original Iowa shooting locations (16mins) Hosted by John Sullivan this is a really fun look at the filming locations from Children of the Corn. Includes great interviews with locales an extras.

Stephen King on a Shoestring, an interview with producer Donald Borchers (11mins)

Welcome to Gatlin: The Sights and Sounds of Children of the Corn, an interview with production designer Craig Stearns and composer Jonathan Elias (15mins)

Cut from the Cornfield, an interview with the actor who played "The Blue Man" in the fabled excised sequence. (5mins)
Storyboards

Disciples of the Crow, a 1983 short film adaptation of Stephen King's short story
Posted by The Video Attic at 8:47 AM