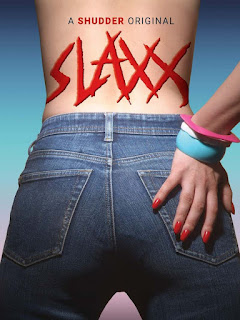 2020's Slaxx is a movie that I wanted to see during its virtual run at Fantasia Fest but, due to extremely limited screeners (only going to very big outlets) I was unable to see it. Indeed, this gave the movie a certain buzz and hype. A trendy clothing store is launching a new pair of jeans during a chaotic Monday-Madness sale. While the staff are going crazy to get ready for the opening all hell breaks loose when a pair of jeans comes to life, killing everyone in sight. I have to admit that the first time I watched Slaxx I thought it was fun but it felt like certain aspects weren't as developed as I thought they could have been. However, watching it recently watching since its initial festival run I feel like I've come around.

From the outset director Elza Kephart's film is as subtle as a sledgehammer when it comes to being a blood spraying satire on 'woke' cooperation's, shallow influencers, and vanity seeking trend-setters. Kephart holds a mirror up to consumers and shows how something like jeans can come at the very real, very high cost of human lives. This serious subject matter actually juxtaposes quite well with it's surreal, even absurdist premise. I think that its fun watching a pair of pants kill people yet, I think that its enjoyable but doesn't shy away from having something important to say. The message is certain one we have seen before to come degree in other films but never in a way that so perfectly blends savagely sardonic  humor. The writing is equally parts fresh and cutting and, for better or worse doesn't spare sensitive topics like worker exploitations and eating disorders. The latter I feel is a good example of how this movie is somewhat shallow some of its humor. Instead of offering a smart examination of certain topics it comes off as punching down and a bit cringe-worthy. I will say that the movie does have a lot of fun with the horror genre and there was some nice subversions of tropes that kept me on my toes. Not to mention the film is well photo, acted with some moments that were so odd yet so utterly brilliant (which I won't spoil here).

Slaxx is a movie that is enjoyable, despite some so-so humor. For anyone that worked in retail or for a big cooperation its not really that far off. Black humor and a biting satirical bent makes this movie a must-watch.

Picture/Sound: Most of the times 720p movies look fairly good thanks to being shot on HD cameras and therefore the upconvert looks solid. Slaxx is overall a nice looking film with sharp details and, while not a incredibly colorful movie does showcase its palate. Having said that there is a lot of grainy noise throughout that is at times distracting. Sound wise the movie has a nice robust DTS 5.1 and sound design and dialogue comes through nicely.
Extras: Slaxx's has a nice array of extras including: The Story Behind Slaxx, The Pant are Alive Producing A Killer Pants Movie, Call in the Death Consultant, Casting Slaxx, Behind the Scenes Photo Gallery
Posted by The Video Attic at 11:31 AM