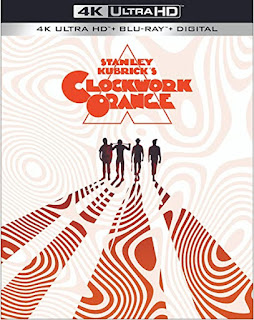 Stanley Kubrick's 1971 A Clockwork Orange was a movie that was and is a powerful, and for some a very disturbing watch. But, it has firmly cemented itself as an iconic '70s era film from what is considered a master craftsmen of cinema. The movie follows Alex (Malcom McDowell) and his droogs through their wild lifestyle. When a break-in goes horribly bad his droogs betray him, and leave him for the police. Thus begins a strange journey of experiments and philosophical exportation in this trippy, brutal experience.
I mean, what can be said about this movie that hasn't already? Its extremely well made with Kubrick at his peak of creativity and boldness. The movie is mean, and even nihilistic but it is nicely balanced with some very probing questions of choice, free will and what it means to be human. From a technical standpoint this film has Kubrick's standard incredibly visual style, amazing tracking shots and breathtaking set pieces along with a booming score. Considered too old for the role Malcom McDowell is utterly spellbinding as Alex. Prior and after McDowell has done a lot of awesome film and tv but he will always be remembered for this role. On a personal note I discovered this movie in high school and even read the book of which its based.
If I were forced to rank my all time favorite movies, I would have to have place Clockwork Orange in my top ten out of literally thousands upon thousands of movies I've viddy'd in my life. Its deep, its unflinching and was made by what I considered one of the greatest directors of the 20th century. This movie isn't going to be for everybody but I will just say there is a reason why its so iconic and still so powerful over forty years later. A writer for Blu-Ray.com called this "an ugly movie" which is to totally miss the point of both the book and the movie. Yes- this movie has ugly acts but it doesn't do it without having a point.
Picture: First I want to say: This restoration has been in the works for literally years. It was also supervised by Kubrick's right hand man Leon Vitali.  In fact, Vitali mentions the restoration undertaking at the end of the 2017 documentary Filmworker. I always like to stress this fact because Warner Bros. doesn't do half measures with their UHD's especially their older titles. Having finally gotten to see the fruits of this years long labor-WOW it was worth the wait. Colors which plays such a vital role in the films subtext and text are, extremely well balanced. Thankfully things arent overly bright and processed nor are the muted. A very nice middle ground is employed. The scenes in the milk bar are for some reason especially vivid and beautiful looking. Images overall look crisp and clean with grain being present but smooth and not chunky or distracting. Small details in costumes, props, sets and locales are are striking and-this is coming from someone who has seen this movie many many times before.
Sound: Much has been made of Clockworks audio. Those with a surround sound system may find this track to be lacking in the kind of complex depth that could be rendered by maybe a Atmos track. I think thats a fair criticism-however, I dont think its a deal breaker per se. I still this is a strong clear track that does suffer from a poor balance in audio levels. A mono track is included for an alternative.
Extras: An array of extras has been ported over from the previous edition and includes:
Audio Commentary by Malcom McDowell, Nick Redman, Still Ticking: The Return of A Clockwork Orange  (44mins), Great Bolshy Yarblockos! Making A Clockwork Orange (28 minutes), Turning Like Clockwork (26 minutes), Malcolm McDowell Looks Back (11 minutes) and a Theatrical Trailer
Posted by The Video Attic at 8:39 AM