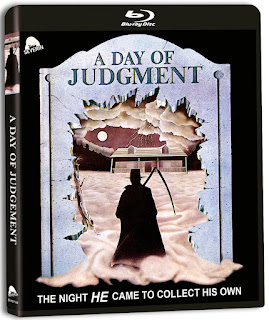 Disclaimer: Severin Films  has provided me with a copy of this film free of charge for the purposes of review. All opinions contained within are my own honest reflections.

The slasher horror sub-genre can be traced back to as far as Peeping Tom (1960)/Psycho (1960) (and its roots in Agatha Christine novels) but, in 1980 Friday the 13th exploded onto the scene. Since then there has been a lot of different slashers filling video shelves and movie theaters. Believe it or not, religious themed has been done before. The Redeemer (1978) for example is a properly creepy slasher released the same year as Halloween (1978). Set in the 30s this movie tells of a small town over flowing with sin. A force is taking these sinners right to hell in this early 80s horror outing.

I have seen a lot of slashers and whilst Day of Judgement is not the weirdest, it certainly does stand apart from the pack. Here we get the literal wrath of God slicing through sinners. I think that having a small town cesspool of lies, greed, lust and murder makes for a devilishly good backdrop and the movie is dripping with style and atmosphere on a budget. Clearly this movie was made for pennies but I can tell that Reynolds put a lot of blood and sweat into this project and the end result is pretty damn interesting. The entire movie has this really strange vibe that is only further enhanced by its DYI costumes and production values. Not to mention that the film is over-the-top, totally sincere and easily finds itself in that sweet spot of so-bad-its-enjoyable. For hardcore slasher fans the movie isn't that gory but it does have some nasty, fun surprises in store. I will say I just wished there was more killing and less melodrama.

Pompous in its self righteousness and weird as hell!   A Day of Judgement is a must watch!

Picture: Severin provides a pretty nice looking transfer, especially for what I can only assume was rough original film elements. The film has an overall brightness uptick and the image has a nice amount of depth and clarity. Colors are nicely balanced with skin tones have a remarkably nice look to them. Some artifacts and noise are present but nothing that is distracting to the overall product.

Sound: Day of Judgement has a nice DTS 2.0 track. Dialogue comes through nicely with no unwanted background noise or audio drop out.

Tales of Judgement: Interview with Filmmaker Worth Keeter and Writer Thom McIntyre