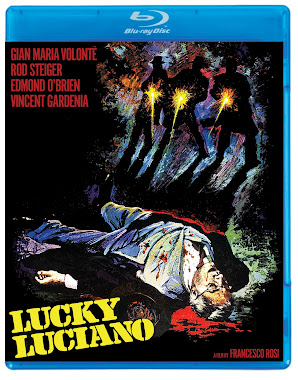 The Godfather (1972) truly sparked the interest back into gangster films which has not really been popular to that degree since the '30s, especially in the Hollywood pre-code era. Coming a year after Coppla's Oscar winning film was Lucky Luciano (1973). The film is as the title suggests a biopic of the famed Lucky Luciano. The movie follows his criminal career from the 20s to the 60s.
Credit where credit is due Lucky Luciano is a bio pic that probably better directed and constructed than a typical rushed Godfather knock off. True the movie does try to capture that flavor but it also takes more risks and provides a rawer look at organized crime that Hollywood couldn't really fully get away with. The fact that this movie is Italian further helps give the movie a rich and realistic flare that a lot of the other post-Godfather knock off films don't have. Also, for being a lower budget the movie have a nice production design, costumes and sets that feel period accurate. The movie is also a highly engaging and interesting watch despite some talky-moments. I will say some of the acting is rather flat.
Lucky Luciano is a highly entertaining gritty, stylish gangster outing that is top notch.
Picture: Lucky Luciano comes by way of a 4k scan from original film elements. The movie which is almost fifty years old at this point has a nice refreshed look. You can really notice the brightness and a level of clarity. Grain is a bit on the heavy side but not on the chunky side and not distracting to the overall picture presentation. This film has a very muted color palate so whilst colors don't exactly pop here the restoration does feel in line with what the DP and director no doubt had in mind.
Sound: Lucky has a nice DTS 2.0 track. Dialogue comes through nicely, as does the score and sound design. A really nice overall sound presentation that actually packs a nice little punch in my opinion.
Extras: Includes a commentary track by Film critic/historian Simon Abrams as well as a trailer.
Posted by The Video Attic at 11:54 AM