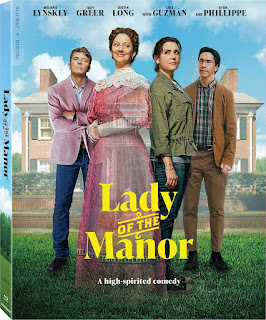 Disclaimer: Lionsgate Films  has provided me with a copy of this film free of charge for the purposes of review. All opinions contained within are my own honest reflections.

Lady of the Manor (2021) somehow fell totally off my radar and-it turns out there is a good reason for that. A stoner slacker (Melanie Lynskey) finds herself living in a mansion and haunted by a Southern belle (Judy Greer) who must coach her on being a better person in this utterly strange and baffling "comedy".
Lady is a prime example of how a incredibly talented cast, and even a decent premise can be tanked so hard so quickly. Justin Long and Christian Long both serve as writer director and producer in what can be generously called a comedy. As I said, the set-up has a lot of promise but frankly, incredibly bafflingly bad writing truly sinks this film. Gross-out humor isn't a deal breaker for me per se but this movie feels like it was written by a 12 year old who giggles every time a naughty word is uttered. Furthermore, the script feels like first draft material at best. Its painfully to watch excellent actors try to salvage this mediocre film.  This movie clearly had a hard time getting funded with a list of producers a mile long and seems like a passion project for Long brothers. I just wish they would have brought on a 'ghostwriter' (oh the irony!) to really give this screenplay a overhaul. What we get is a frustrating film that isn't saying anything, isn't funny and wastes so many talented actors. And, I could even see some decent chemistry between Greer and Lynskey (who again are fantastic).
I think I tend to be harsh on movies that feel like they have potential but Justin Long and his brother Christine seemed to dominate the every aspect of the production which feels like they didn't allow for any other creative input. Just watch the Brit series Ghosts for how supernatural hijinks/fish out of water premise is handled hilariously.
Picture: Quality of the film aside, Lady of the Manor looks great on 1080p. Thanks in large to high-def cameras that allow for a higher res upconvert. The overall image looks crisp, clean and showcases what is a decent production design.
Sound: Lady of the Manor has an equally good DTS 5.1 track which packs a bigger big punch in terms of offering a big sound. Dialogue, score and sound design come through well.
Extras: Lady of the Manor includes a nice array of features including a commentary by the Long brothers, A Fart Warming Tale of Friendship and Vengeance: Making of Lady of the Manor, Outtakes and Deleted Scenes.
Posted by The Video Attic at 8:02 AM