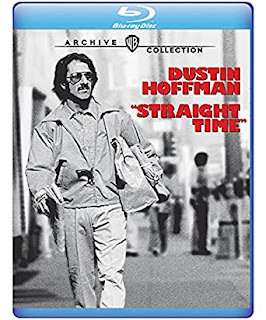 1978's Straight Time is a movie that honestly flew totally under the radar, but, upon this re-release I heard a lot of good things. Plus, you can't really go wrong with a gritty '70s film with Dustin Hoffman. Based on the novel titled No Beast So Fierce, Straight Time tells the story of a down on his luck and newly released convict Max (Dustin Hoffman) must learn to navigate life outside of prison. He meets a lovely young lady named Jenny (Theresa Russell) and tries to live a "straight life". But old habits die hard and Max starts getting back into petty crime which quickly escalates into armed robbery and murder.

Whilst researching this review it seems a shame that director Ulu Grosbard only made less than ten movies in his entire career. Though the premise is a bit on the simplistic it has enough grim, grit and engaging plot to keep me glued for all nearly-two hours of the runtime. It also had something interesting to say about the prison system which is just as timely as it was in the late '70s. Grosbard directors some heavy hitting character actors and its incredible that everybody seems to not only mesh well with one another but every actor is on the same page stylistically and tonally. Dustin Hoffman of course makes a meal out of the role and always knows how big to take the character without going hammy. Theresa Russell is also great and, like Hoffman knows when to have peaks and valleys in her performance. This movie is over flowing with excellent supporting actors such as Harry Dean Stanton, Gary Busey, M.Emmet Walsh and an early role for Kathy Bates.

Incredibly directed, acted and photographed, Straight Time should be counted among the best of the '70s which is certainly saying a lot.

Picture: I know I sound like a broken record at this point but, Warner Archive again doesn't disappoint when it comes to high-quality high-def restoration. Straight Time looks like it retains the gritty color palate and whilst the colors pop it doesn't feel over processed or overtly bright and cheery, no doubt what Roizman and Grosbard had in mind. Skin tones have a nice natural look and the overall picture has a fresh, crisp look. Outdoor scenes especially look vivid and sharp. Grain is at times heavy but not enough to be distracting. Another nicely done visual presentation.

Extras: Straight Time ports over the Hoffman/Grosbard commentary track as well as the original trailer.