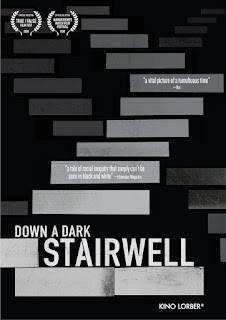 Disclaimer: Kino Lorber has provided me with a copy of this film free of charge for the purposes of review. All opinions contained within are my own honest reflections.
Down a Dark Stairwell (2020) tells the tragic story of a innocent man named Akai Gurley who, on a fall night in 2014 was shot and killed in a stairwell. Peter Liang, a Chinese American Officer claimed it was a accidental misfire. The documentary unfolds into what happened and the outcry it had on the residents of New York.
Director Ursula Liang's second feature documentary is a heartbreaking, harrowing exploration of racism and  police conduct through the lens of both the African American community as well as the Chinese American community. The film presents both sides: Peter Liang made a tragic mistake as well as:  the cop was a reckless rookie. At the end of the day, no matter where you land on the issue, Liang makes it clear not to lose focus on the fact that an innocent person senselessly lost their lives that night in 2014. Ursula does a good job at taking time a paint a complete picture of the victim as well as who Peter Liang was as well as both sides of community uproar. Things got really interesting when both sides of the protest literally meet face to face.
Stairwell never languishes in gory details or what feels like cheap exploitation.  Rather its a well informed, well rounded dive into some very serious issues in America. A eye opening and sobering look at racism and our legal system.
Picture/Sound: Down the Dark Stairwell looks pretty solid on 720p. As I've often said, Kino Lorber documentaries are typically shot on higher-res cameras, therefore it looks just fine transferred onto DVD. Sound wise we can a nice DTS 5.1 track with dialogue and sound design coming through nicely.
Extras: Extras include: Behind the scenes footage, deleted scenes and trailer.
Posted by The Video Attic at 8:51 AM