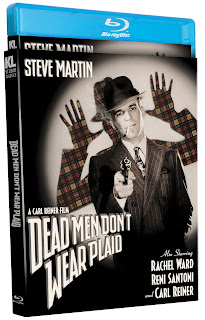 Dead Men Don't Wear Plaid (1982) is a movie that as a Noir buff I obviously had heard of prior to this re-release, but never actually got around to watching. For those unaware, the movie is a parody of film noirs and utilizes actual film clips integrated into the new footage. The plot is a pretty standard one, Detective Rigby Reardon (Steve Martin) helps a beautiful woman named Juliet Forrest (Rachel Ward) who is convinced her father's fatal car crash wasn't an accident. Dames, double crosses and hijinks ensue.

Being a fan of noir and seeing many of them prior to this, it was fun to spot the references and of course see clips from many classic movies cleverly weaved into the narrative. It's also worth noting that this was famed and iconic costume designer Edith Head who lived to be 83 and won a whooping eight Oscars in her career. I think its kind of fitting for her to design costumes for this film since she literally worked with and in most cases dressed many of the actors used in the archival footage. I will say the plot is pretty standard, the jokes sometimes work and at other times kind of fall flat.

The real hook is how the filmmakers are able to work in old footage, sometimes in cut a way's but at other times green screened right into new footage. They also use clever overhead body doubles to make things seem a bit more believable. The novelty I think helps smooth over some of the rough patches. Speaking of, this movie has some cringe-worthy moments that I feel is worth a mention. Not five minutes in and Steve Martin's character sexually assaults a passed out Juliet.  It's all the more disturbing as its played for laughs. Later in the movie he does this AGAIN. Yeah, you can say different times and all, but it still seems like gross behavior that was normalized and even played for laughs. A generous reading of this might be that this is a satire of noir's but I have to respectfully disagree. While its true that women were objects of the male-gaze in noirs, by in large women were given key roles to play and, I always read the "femme fatale" as having a lot of power and agency.

Steve Martin is an actor you either love or hate. I think overall he's a good actor with a nice comedic timing and a charm that is undeniable. In my opinion, I think he's one of the things outside of the novelty aspect that saves this film from being a bit of a slog. Despite doing some...um. questionable things you can't help but want to take this journey with him.  Dead Men Don't Wear Plaid is a enjoyable movie despite some shaggy plotting and some cringe-worthy content. I think that the techniques used to blend old films with new (new for the time that is) is pretty cool and the main selling point here besides Martin himself. Overall, a pretty enjoyable outing even if it lacks polish.

Picture: Dead Men Don't Wear Plaid is pretty amazing looking, especially for a movie that is over forty-years old at the time. The original footage looks really good and has very little to no artifacts or noise. Images are sharp and the black-and-white contrasting is handled quite well. As for the older footage -well, it looks rough but I don't blame Kino as it probably would have been impossible to get this footage looking pristine to match the '82 film. Besides, I actually like this as it adds to the overall charm of the piece. Overall, I think it's safe to say this movie probably never looked better on home video.

Sound: Dead Men Don't Wear Plaid has a DTS 2.0 track. Dialogue is crisp and the overall audio does match fairly well cutting to older footage which was a nice surprise.

Extras: Dead Men has a new commentary track with Heartbeeps  (also available from Kino) director Allan Arkush and filmmaker Daniel Kremer. The track is fun and very informative. They go into the history of the production and sprinkle in nice tid-bit info throughout.