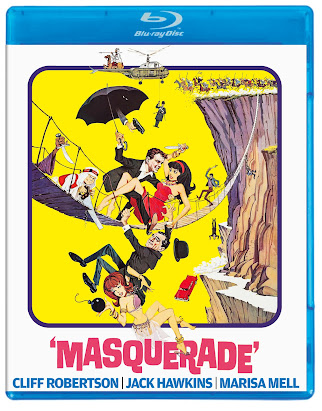 Basil Dearden is by no means a household name, especially in the US but has some pretty interesting films to his credit including a segment for the amazing Brit. horror anthology Dead of Night (1945) and the incredibly daring film Victim (1961) which was an early movie to deal with LGBTQ subject matter in a positive light. The British government sends an American war hero to kidnap and hid a child Prince in this farce. Masquerade is very much a swinging '60s Bond proof decades before Austin Power's came onto the pop-culture scene.
Dearden and some incredibly top notch screenwriters Michael Relph (The Man Who Haunted Himself) and two time Oscar winning writer William Goldman (The Princess Bride, All the Presidents Men) pen a comedy that is properly dry and sardonic. I love how this movie is a spoof is more nuanced and subtle in its parody. Indeed, it has a very tight plot filled with twists and turns that feel like they could perfectly live in a real Bond film from the era. But, of course Dearden provides plenty of cheeky humor at the expensive of both the British and American government. It also VERY '60s and fans of kitsch and the movie does camp it up at times. I also loved the moments of surrealism thrown in for good measure. Visually, the film is also really interesting and DP Otto Heller (who shot many excellent movies including 1960's Peeping Tom and The Lady Killers 1955) gives this film a further polish.
The cast is also great with Cliff Roberston, Jack Hawkins and Marisa Mell all giving great performances. Also includes a fantastic supporting cast including cult icon Charles Gray (Rocky Horror Picture Show, The Devil Rides Out), Michel Piccoli (Contempt, Belle de Jour) giving this their all.
A fast paced, dry humored send up of spy-thrillers that delivers on plot and performance not to mention visually interesting. A under loved movie that deserves to be re-discovered.
Picture: Masquerade is sporting a new 2k scan and wow, this movie looks fantastic! Colors truly pop and are incredibly well balanced. There is an overall sharpness and retains a lot of detail in costumes, sets, locales. Artifacts have been cleaned up leaving a nearly pristine looking picture. Skin tones have a nice nature look. Really impressive and if you are a fan of this film (or a newcomer) I dont think this has ever looked this good on a home video format. This is great because, as I said in my review this movie is well shot, being handled by one of the best British cinematographers.
Sound: Masquerade has a DTS 2.0 track. Dialogue, score and sound design comes through quite nicely without any unwanted drop out issues or unwanted background noise.
Extras: Extras include a commentary by Howard S. Berger and Chris Poggiali and a trailer for this film and others from Kino.
Posted by The Video Attic at 7:24 AM