All the Streets Are Silent: The Convergence of Hip Hop and Skateboarding 1987-1997 (2021) Kino Lorber DVD Review 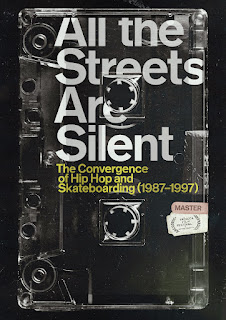 Disclaimer: Kino Lorber  has provided me with a copy of this film free of charge for the purposes of review. All opinions contained within are my own honest reflections.

Hip hop and skateboard culture, two things I know virtually nothing about. Its for this exact reason is why I picked this documentary to review. As the very long title makes it clear, the doc explores the rise of Hip hop and skateboarding an skateboard culture. This is director Jeremy Elkin's first feature length documentary (he has two previous short doc films) and, I have to say he does a great job at taking a big topic like hip hop and skate culture and NY sub culture and lays the groundwork narratively in a easy an digestible ways.

Not only does the film talk about and explore in depth how the two worlds of hip hop and skateboarding collides but also the rise of huge rap-artists, and the NY underground music and club scene. Incredibly rare home videos and photos truly brings into focus the time, place and flavor of late '80s early '90s NY. Not to mention all the key players that were at the ground zero of this scene are interviewed. This makes for a highly interesting, engaging and important document. Elkin's is able to give his documentary a well thought out structure not to mention interview subjects that are lively and engaging. Thankfully Elkin stays on topic and the documentary never feels like it wavers from the topic like some documentaries tend to do. The movie also talks about the making of Kids (1995) the film which cast a lot of real life skaters.

Follow the highs and lows in this engrossing documentary about NY underground, skateboard culture and hip hop and how it all collided.

Picture/Sound: Overall, the picture transfer is very solid. It of course has its limitations with a lower-def format but seeing how a lot of the doc is VHS home videos transferred over its not that distracting. Sound wise is also good though it seemed like the sound was slightly out of sync for parts. Not sure if this was an error playing on a PS5 or a issue with the transfer itself.