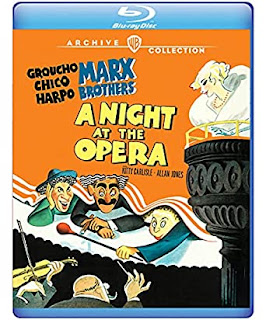 Please Note: You may be wondering if this version has about three minutes missing -Sadly, this does not. Its the 92 minute version. This scene is thought to be lost for good.
Considered by many fans and critics to be among the very best films made by the Marx brothers, A Night at the Opera (1935) makes its long awaited US blu ray debut from Warner Archive. High hilarity and hijinks ensue as a smooth talking business manager named Otis T. Driftwood (Groucho Marx) and his two whacky side kicks navigate the world of the opera all whilst thumbing their noses at the stuffy elite. Screenwriter Morrie Ryskind (My Man Godfrey, Stage Door) and George George S. Kaufman (You Can't Take it With You, Animal Crackers) who were legendary in the Golden Age of Hollywood truly craft a comedy that sizzles with fast paced jokes and truly showcase the talents of the Marx brothers. Not only is the dialogue snappy and rapid fire but the gags are creative and hilarious. And, since A Night at the Opera was made and originally released during the Great Depression so it makes sense that the Marx brothers would want to take a savagely sardonic take on the rich.
Night at the Opera has a fantastic cast. Of course the Marx brothers have never been better and the actors truly showcase why they were geniuses in their field. The supporting cast is great as well with Kitty Carlisle, Allan Jones etc. I have to admit that while I do enjoy A Night at the Opera I wouldn't say it was my favorite of the classic Marx Bros comedies.

Picture: A Night at the Opera gets a sending ovation for its amazing transfer. This is sourced from a brand-new 4k scan from the best available material. My goodness, what a stunning looking print. Once again, like the other WA titles this movie is pristine with no artifacts or noise. The black-and-white photography is well balanced and has a nice striking contrast which has nice depth.

Sound: Opera has a nice DTS 2.0 track. It isn't perfect and does has some unwanted background noise. This is most likely not the fault of WA but rather just the back sourced audio material. Still, the movie has a nice full sound and dialogue and music comes through strongly.

Extras: A Night at the Opera ports over the extras from the previous release and includes: Commentary by Leonard Maltin, Documentary: Remarks on Marx, Groucho Marx on the The Hy Gardner Show (1961 broadcast), 3 Vintage Shorts, Trailer