A Life At Stake (1955) The Film Detective Blu Ray Review 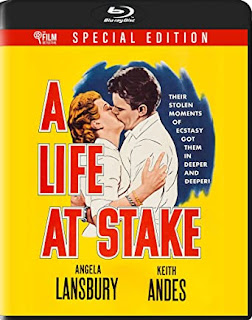 1955's A Life At Stake is a movie that I had actually never had even heard of, let alone saw. But, it has Angela Lansbury so it had my attention from jump. The movie tells the story of a washed up architect named Edward Shaw (Keith Andes)  who finds himself in business with a woman named Doris Hillman (Angela Lansbury) in a real-estate deal. I will say that ALAS is basically a B-noir programmer that is sadly underwritten. Russ Bender an actor tried his hand at feature film screenwriting, his first being this film. Bender clearly struggles to build a good engaging mystery. Indeed, the movie is a pretty standard, by-the-numbers noir plot that was done better in other films. Moreover, the movie lacks a lot in character development and, worst yet basic set up is lackluster. Like, there are elements of the story that feel missing.

Also, for a film noir this movie doesn't have the kind of stylistic flourishes that the movement was famous for. It again boils down to budget and a woeful lack of creativity. The big selling point is: Angela Lansbury as a femme fatale. Lansbury who was twenty-nine at the time of filming is of course amazing. She always had grace, talent and beauty and carries the film incredibly well. She really is the biggest strength the movie has going for it and nobody how hum-drum the plot is she dazzles throughout.

This is the kind of movie that has promise but bad writing and so-so directing holds it back. It feels rushed out and not given the chance to be creative or interesting. Lansbury is truly the one thing that makes this movie watchable.

Picture: The Film Detective is pretty consistent when it comes to stellar looking re-releases. A Life At Stake which makes it US Blu Ray debut and is quite stunning looking! The movie, which is over sixty-years old is given a nice 4k scan. Right off the bat the black-and-white photography has a nice contrast and a noticeable brightness. The overall image is clear, with sharp definition in locales, costumes and sets. Grain is heavy but not overtly chunky. No noise or artifacts that I could notice. I will say there is some slight blurring and some rippling in another. Not sure if this was a error in the scan or due to the negative they were working from. Either way its not too distracting. Overall, a really nicely done job.

Sound: A Life At Stake has a DTS 2.0 track. The film has an overall nice sound presentation. Dialogue comes through nicely as does score and sound design. There is a few moments were the audio sounds bad but I take it this is due to the elements TFD had to work with. Like the picture, these slight flaws don't distract from the overall product.

Extras: A Life At Stake includes: Commentary by film scholar Jason A Ney, Hollywood Hitch-Hikers: A Bollyhoo Pictures documentary on the filmmakers, Also includes a wonderful full color booklet with a essay by Jason A Ney.