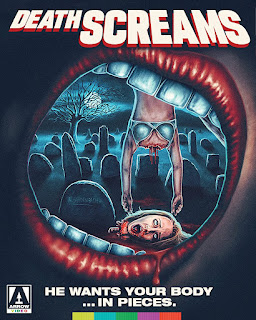 Disclaimer: Arrow Video has provided me with a copy of this film free of charge for the purposes of review. All opinions contained within are my own honest reflections.
Sean. S. Cunningham's Friday the 13th (1980) was not the first slasher but it was, along with Halloween (1978) hugely successful and helped spawn countless body-count-films. Death Screams (1982) has been on DVD previously but is making its US Blu Ray debut from Arrow Video. A group of care free teens are killed one-by-one during a small town's end of summer fair.
Death Screams is a film that I recall seeing the artwork for at my local mom and pop rental shop but for whatever reason never actually rented it. Its since remained a blind spot for me in terms of early '80s slashers. So...was it worth the wait? Death Screams is pretty typical in terms of early slice-n-dice where you have a lot of padding of what could generously be called a story. Seriously, the movie has A LOT of teens screwing around and not enough in terms of setting up its main thread. Important set ups that are "paid-off" in the finale are not fleshed out nearly enough to be clever or effective. The end result is a movie that feels like it should have been a lean hour but has been stretched to a ninety-minute runtime.
Things thankfully pick up towards the end but it feels too-little-too-late.
Still there is something really charming about Death Screams. A lot of this comes from the 'locals' in that inhabit the films small town. It adds some kitsch and quirkiness that this movie so badly needs. The low budget brokenness further makes it pretty endearing. Not to mention a truly at times baffling score, which goes tropical at one point. As for the kills, this is another area that is, in my opinion kind of lackluster.
Death Screams is probably only going to interest those die-hard '80s slasher fans but the movie is for the most part a pretty dull and by-the-numbers affair despite having some low-budget charms. Even the kills are not that memorable if I'm being totally honest.
Picture: Death Screams has a new 2k scan. I have to say I was pretty impressed by this transfer. The movie has very little to no noise and the colors really pop. Moreover, the grain is present but incredibly smoothed out. It also doesn't have a washed out or overly bright look. Even daytime outdoor scenes are well contrasted. Having said that the latter half of the movie does get a bit rough with scratches etc. This may be due to the reels for this portion of the film being in worse condition.
Sound: Like the transfer, the sound is actually really well done. The DTS 2.0 track is really robust, especially for a low-budget offering such as Death Screams. Dialogue comes through nicely as does the score and sound design.
Extras:  Death Screams has a really nice array of extras. Included is Commentary with Charles Ison and Worth Keeter, commentary track with The Hysteria Continues, All the Fun of the Scare (32mins) A New documentary on the Making of Death Screams featuring cast/crew, Alternated VHS Opening Title Death House (5mins), TV/Radio Spots, Image Galleries.
Posted by The Video Attic at 8:50 AM