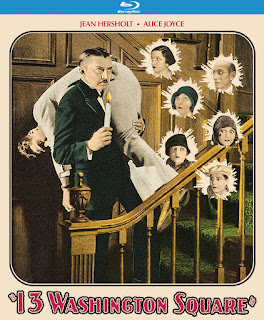 Though not a household name, director Melville Brown was considered a pioneer in silent cinema. 13 Washington Square (1928) comes at the tail end of the silent film era when talkies came and became the mainstay. Based on the play of the same name, the movie follows a headstrong snobbish mother named Mrs. De Peyster (Alice Joyce) who will stop at nothing to keep her son from marrying a "common woman". To this end she cooks up a scheme to keep this from happening.
I have to say that this was a pretty fun little movie. The comedy is very board here but everything was in the silent era. Things were played big because thats what people were use to for plays. There is also a faux-haunted house vibe that also makes for some fun gags. I'm also down for some in a creaky old haunted house hijinks which this movie provides plenty
It also has something to say about elitist's and class-divide, something that would be more relevant the following year with the Great Depression hitting America. It's also interesting to see this is a proto-Universal horror (though its pure comedy) as it makes a meal out of its spooky setting and is chocked full of atmosphere. As for the plot, its very fast moving and at only 70 minutes the movie wastes no time in getting into the thick of things.
Though with a lot of movies from this era you have to suspend a lot of disbelief in order to embrace the narrative. And, you know what? I'm okay with that. 13 Washington Square is a lean little movie with some nice twists and turns. Certainly worth checking out.
Picture: Sporting a brand-new 4k transfer 13 Washington Square is another marvelous restoration from Universal pictures. The nearly one-hundred year old movie is staggering in just how sharp and crisp it looks. Though some slight noise and artifacts are to be expected even in the best of clean up for the most part this is a nearly pristine looking film. Grain is present but smoothed and you can tell that  alot of care went into the original film elements. You can also see a lot of details in locales, sets and costumes.
Sound: Includes a score by Tom Howe.
Extras: Extras for 13 Washington Square includes a commentary by film historian Nora Fiore. Fiore provides a insightful and highly engaging track which I quite enjoyed.
Posted by The Video Attic at 7:36 AM