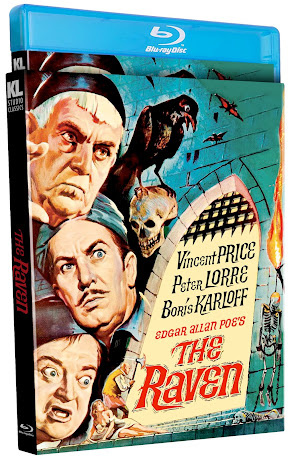 Other Vincent Price Reviews:
Master of the World HERE
My Review for The Last Man on Earth HERE
My Kino Studio Oct. Preview HERE

During his commentary track historian David Del Valle sums this movie up perfectly in saying that its, "The closet Corman ever came to directing a Disney film". And this kind of blew me away because even after seeing the movie a dozen times before, this comparison never dawned on me at least on a conscious level.  A magician named Dr. Craven (Vincent Price) must confront his deadly enemy Dr. Scarabus (Boris Karloff) and do battle in this silly, fun movie from Roger Corman and screenwriter Richard Matteson (I Am Legend scribe).
So, I want to get something out of the way first and foremost. This is by far not one of the best Corman-Poe-Price movies and it suffers from plot holes, the special effects are dated and as critics both modern and at the time have rightly pointed out it  tends to be on the hammy side. However, I think its in these so-called "flaws" where the movie is pure kitsch magic. Its worth noting that this movie is more comedy than horror but Corman and Matteson seem to lean into its more campy-elements and the movie thankfully never takes itself too seriously. The humor is VERY broad which may be a outright deal breaker. But, for me it tickles my funny-bone just right. I mean, how can you not see Peter Lorre dressed like a big black bird and not be on totally on board. The production design is really excellent especially when you consider that this was made on a Corman-level production. For example Dr. Scarabus's castle interiors are truly a sight to behold in my opinion.
Filled with castles, cobwebs, magic duels and Gothic costumes and set designs, Raven has a wonderfully spooky vibe. It's not mean-spirited and truly makes for an enjoyable Halloween seasonal watch. The cast is fantastic with Vincent Price maybe going a bit too cartoony but I think it works in the contexts of a fantasy-comedy. Boris Karloff takes a more serious approach and he and Price mash together beautifully. Peter Lorre is, as always a lot of fun and has some brilliant ad-libbed lines that are a hoot. The lovely Hazel Court co-stars and is able to hold her own among these titans. Co-starring is Jack Nicholson , yes, that Nicholson in a very early role.
Again this movie has its issues but I think its a hell of a lot of fun and it's been a firm favorite of mine since I was a kid. If you go in with the right expectations I think you will find a real diamond in the rough. Stark-Raven enjoyment to be had here.

Picture: Kino Studio Classics impresses with this transfer. I have seen this movie many times both on DVD and HD from the previous release and its safe to say this movie looks great. There is a nice uptick in brightness and you really get a nice sense of clarity as well. Colors are big and bold and details like costume textures, sets and locales really stand out nicely. The colors also tend to have a nice warmth to them and isn't overly processed. Some artifacts are present but frankly not much and not enough to distract one from the overall nice looking product.

Sound: The Raven has a very nice and I would even say big bold sounding DTS 2.0 track.

Extras: I am going to be comparing this re-release with the Vincent Price Vol II re-release. I will be breaking down what is included and not included and whats brand-new to this release.

I don't normally do this but I wanted to be a helpful guide for those wanting to know what's the difference content wise.

PLEASE NOTE: Its not to say one release is better than the other-in fact I think both the box set and stand-alone releases are well worth owning. The Kino Studio release is certainly a more affordable way to own this movie on HD.

David Del Valle provided a brand-new commentary for this release which is the most exciting part of this new release. For those of you not in the know, David Del Valle has been a historian for decades, having interviewed and formed close relationships with many many famous genre players included the primary cast of The Raven, including Price and Hazel Court and Roger Corman. Valle has written books and been in the trenches for forty-plus years. I say all this because you really couldn't find a better person to wax-poe-tically about this film. Valle is as always incredibly well researched and shares personal firsthand knowledge gained from years of research and frankly from actually talking to the principal players. David also doesn't shy away from some criticism towards Corman, but, never in a bitter or mean way.  At the end of the day he has a wit and charm that honestly is unmatched in any other historian. Well worth 'raven' about.

Ported over from the Scream Factory Release and Included in the Kino Studio Release includes: Richard Matheson Storyteller: The Raven, Corman's Comedy of Poe

Things NOT ported over from the Scream release includes: Promo Record, Still Gallery and Introduction and Parting Words from Vincent Price. Its worth noting that these segments were unable to be ported over to the re-issue of Vincent Price Vol 1 no doubt due to being unable to re-license them.