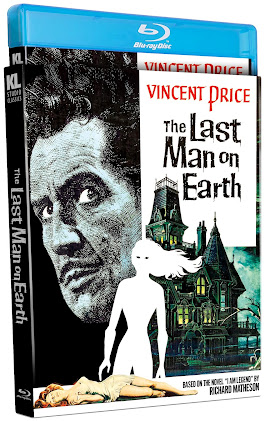 Vincent Price/Boris Karloff 's The Raven Review HERE
The Last on Earth (1964) was the first adaptation of Richard Matheson's famous novel I Am Legend published in 1954. I've seen this movie a few times but I have to say that viewing it post COVID-19 made it feel ten-times more haunting. Dr. Robert Morgan (Vincent Price) is the last man on earth when a plague turns people into fiends who thirst for blood. But, it seems that he isn't the only living person in this '60s horror outing.
This version of Last Man on Earth has been marred by production issues including Matheson's draft of the screenplay going largely re-written. Matheson of course had been vocal in his lifetime about not liking the script, nor did he like the casting of Vincent Price in the lead role. While I disagree with the latter I think the film does have some pacing issues and and some narrative points could have used a polish. While I do not mind the film taking a little more time with exposition I do understand why it can come off as tedious at times.
For all its shaggy plotting the movie's lasting impact should not underplayed. Though he never officially acknowledged it during his lifetime, its hard not to see shades of  Night of the Living Dead (1968) in its shambling vampires  coupled with the at times expressionistic black-and-white photography. There are a few scenes where the ghouls have their arms stuck in the door, something that Romero famously did with more gruesome results. Its also worth pointing out that in both films a daughter comes back to life only to  attack a parent. In this film its daughter vs. dad and  its the inverse of daughter vs. mother in Night. It's not to suggest Romero or John Russo copied the film but I think its alright to say it may have inspired some elements. The book of course no doubt did. In fact, when Matteson was asked which film adaptation he liked the most of his seminal work he cheekily replied, "Night of the Living Dead".
Furthermore, movie does have a lot of charm and, as I mentioned above in a post-pandemic world the movie has taken on a entirely new dimension of horror. I will happily disagree with the famed scribe and say that Price is effortlessly enjoyable in the role. The icon who was in his early '50s by this point, does what I think is a fantastic job at playing a complex character. I also think for as maybe rough-around-the-edges as the screenplay is, it is a very effective and creepy little film. It has style and loads of atmosphere thanks to the chilling cinematography by Franco Delli Colli.
Out of the mid-60's horror films I think that The Last Man on Earth is one that gets, in my opinion unfairly lobbied as a non-starter. But, I think that outside of what I think is major influences on Living Dead the movie is a brisk, well directed and fun flick that is best watched in the Fall season.
Picture: The Last Man on Earth is another solid transfer. The black-and-white photography has a really nicely maintained contrast with really well done deep blacks. The overall film has a sharpness that comes with a 1080p upgrades. I will say that there is a lot of artifacts and noise in this print. I don't blame Kino, in fact this may be the best this movie will look depending on what state the original film elements are in. Its an overall really good looking transfer, its not perfect but its better than anything you would get in SD. I was also happy to see grain present but really fine and smoothed out.


Sound: The Last Man on Earth has a DTS 2.0 track. Dialogue and score comes through really nicely with no drop out issues or any kind of unwanted background noise.


Extras: I am going to be comparing this re-release with the Vincent Price Vol II re-release. I will be breaking down what is included and not included and what's brand-new to this release.

I don't normally do this but I wanted to be a helpful guide and go above and beyond to what is new and what has not been ported over to the now OOP Scream Factory excellent Vincent Price Vol. II.

PLEASE NOTE: Its not to say one release is better than the other-in fact I think both the box set and stand-alone releases are well worth owning. The Kino Studio release is certainly a more affordable way to own this movie on HD.
New to this release is the feature length commentary by Richard Harland Smith.
Also new to this is the Trailers from Hell with Joe Dante,  An American and Italian Trailer and Alternative Ending is also present on this release and not on the Scream Factory Vincent Price Vol. II
Included on Both the Vincent Price Vol II and this release include: Richard Matteson Storyteller: The Last Man on Earth
Features Not included on the Kino re-release and included on the Vincent Price Vol II Includes a commentary track with David Del Valle and Derek Botelho
Posted by The Video Attic at 9:13 AM