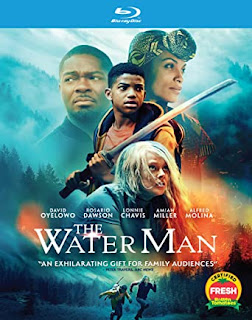 Other RLJE Reviews: The Mortuary Collection HERE
Jakob's Wife HERE
Lucky HERE
Séance HERE
Anything for Jackson HERE
I'm always down for a good fantasy film and I have to say that the title and cover art had me consciously optimistic. The Water Man (2020) tells the story of the Boone family consisting of father David Boone (David Oyelowo), wife Mary (Rosario Dawson) and wide-eyed Gunnar (Lonnie Chavis). The family is going through a lot, with just moving to a new home and Mary dying from cancer. Gunnar, a graphic artist in the making, hears about a local rumor about "the Water Man" and how he is suppose to hold the key to making his mother better. Gunnar along with a local misfit Jo Riley (Amiah Miller) sets off on an adventure to seek the mysterious man.
With its focus on childhood and adventure, as well as trauma The Water Man plays out like a Spielbergian fantasy with elements of a lower-stakes Stephen King (minus the horror) thrown in for good measure. The movie has a pretty simple yet really effective hook and I like how it deals with death in a way that can be approached and easily understood by its intended target audience. While the movie sticks fairly close to the 'heroes journey' I think it explores this well enough that it kept me wildly engaged. I also love how the mystery of the titular Water Man is milked for all its worth, which further helped keep me invested. Its also worth mentioning the great visuals and production design that really ties the fantasy elements together nicely.
What's even more impressive this marks the feature film debut of David Oyelowo. Oyelowo whose appeared in over eighty films and television series as an actor (and is a lead in this film) really directs this film with the confidence and maturity of a seasoned pro. As an actor Oyelowo is as always fantastic and brings a layered and thoughtful portrayal of a man whose dealing with so much in his life. Rosario Dawson is also great, having a small but very weighty role. Dawson is, in my opinion a national treasure and she is perfectly cast here. But, I have to say that its newcomers Lonnie Cavis and Amiah Miller who really impress. Cavis is the main focus and carries the bulk of the action. This can be tricky for a young actor to pull off but I think Lonnie does a excellent job. This also goes for Amiah Miller who also carries a lot of the film. It also doesn't hurt having the fantastic Alfred Molinia in a small but memorable role.
The Water Man does have some wonky plotting but I think that for the aimed audience of children and young-adults this movie has enough great visuals, engaging story and harrowing moments to gloss over that fact. Well worth diving in!
Picture: The Water Man is a movie that was really made for 1080p. The visuals are great for what was most likely a modest budget fantasy film and the HD master helps showcase them. Colors really pop and the vivid way that the color grading is saturated highlights this kind of ethereal quality.
Sound: The Water Man has a DTS 5.1 track. I love that this movie has that extra punch of a 5.1 track rather than a 2.0 as this movie has a excellent score and some nice sound design that makes it well worth the boost in sound. Really well done.
Extras: Extras include: Toronto International Film Fest Q&A, The Making of Water Man, Animation Behind the Scenes and Filmmaker Commentary Track.
Posted by The Video Attic at 7:40 AM