The Conjuring: The Devil Made Me Do It (2021) Warner Bros. UHD Review 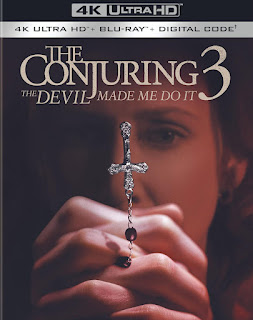 The Conjuring (2013) was a modern classic that felt like the rare time when a truly fun, interesting and at times scary movie was made from a big studio. The movie made on a twenty-million dollar budget raked in over 300-million at the box office not to mention home video sales. It, of course got a sequel that is every bit as good as the original, with some liking it more. It too made a lot of money. And, of course you had a ton of spin-off movies. Though the spin-offs were alright, fans really wanted a sequel in the mainline series. Fans were less excited when it was announced that James Wan would not return to screenwriting and directing duties as he was off doing the Aquaman sequel. If that wasn't bad enough studios were trying to navigate the strange COVID cinema-landscape.
Conjuring 3 aka Conjuring: The Devil Made Me Do was panned by critics but made over 200 million on only a 39 million budget. So, here's the thing. I dont think the movie deserves the hate it gets but I can also freely admit its probably the weakest out of the three mainline entries (not including the numerous spin-offs). Let me first say I think Michael Chaves is a very good director. In fact, Wan hand picked him to carry on the series. Which I think is something that doesn't gets lost in the conversation. The movie opens with a fantastic horror set piece that truly is a high point for the series. Chaves has his own style but the movie also visually and thematically feel very much like a third link into the series.  Also, I noticed some people didn't like this aspect but I think that the movie has a mystery within the narrative that keeps everything engaging. The other complaint is that the movie is light on scares. While that is an issue (more on that in a bit) I still think the movie has enough nice creepy and terrifying moments. Michael Burgess conjures up some dark magic here and, I think that say what you will, this is a great looking film. I would even say  this is the best looking film out of the trilogy.
The magic that Vera Farmiga and Patrick Wilson bring to this series cannot be understated. It sounds super cliché but damnit, they really are the bloody beating heart of these films. I like how threads from previous films are brought back and wisely Chaves understands that their relationship should always be the centerpiece. This further helps connect part 3 not only tonally but thematically as well. My worry was that this new director wasn't going to understand Ed and Lorraine and how they would feel different personality wise. And, I dont think thats the case. I'm also sure that Wilson and Farmiga had input on how their characters.
The supporting cast is also on-fire and includes Sarah Catherine Hook (Monsterland) who, in a short amount of time is proving to be a very excellent and talented actor. Also includes very good performances by Ruairi O' Conner (Handsome Devil) and Jillian Hilliard (Wanda Vision). Hilliard its worth noting is incredible as David and further helps give the film its beating heart.
Here's the thing: the movie suffers from shaggy story beats, and it feels like its missing that special something that Wan brought. Having said that I was totally on board for the wild-ride and, as I mentioned above I felt that the mystery angle helped further keep the narrative interesting.
Okay, I know this was a long review but you know, I had a lot of feelings on the film and its backlash. Conjuring 3 has some issues but, you know what? I really enjoyed it and I think it can totally stand along side the previous mainline Conjuring films.
Picture: Conjuring 3 marks the first in the trilogy (not included the bigger Conjuring Universe films) to have a UHD release. Well, I am here to say that the wait is well worth it! As I mentioned in my review, Conjuring despite its issues is a fantastic looking film. So, its really nice to see this movie looking its best. Images are incredibly sharp with colors having a nice amount of warmth. Blacks have a nice depth and darkly lit scenes really benefit from this upgrade.
Sound: Conjuring 3 has a big bombastic at times sound design and its nice to see a Dolby Atmos track. Audiences is in for a huge and robust sound offering here. Those with a nice surround system will find that, in my opinion this track conjures a nice 3D sound that I think helps complement the atmosphere.
Extras: Extras are located on the Blu Ray disc and includes:  "By Reason of Demonic Possession" – An in depth look at the true story that inspired the movie, "The Occultist" – Meet the terrifying new addition to the Conjuring Universe, "Exorcism of Fear" – Delve into the making of the movie and the chilling exorcism scene that opens the film", "DC Horror Presents The Conjuring: The Lover #1" – A video comic that takes you deeper into the Conjuring Universe
Posted by The Video Attic at 10:40 AM