Here at the Attic we have a darkly lit corner where femme fatales, doomed fellows, damaged detectives and tragic destiny all belly up to a gin soaked smoky bar. The 'czar of noir' himself Eddie Muller stopped by to talk about the revised edition of his best-selling book Dark City: The Lost World of Film Noir which is currently out now!

My Past Interview with Eddie Muller HERE 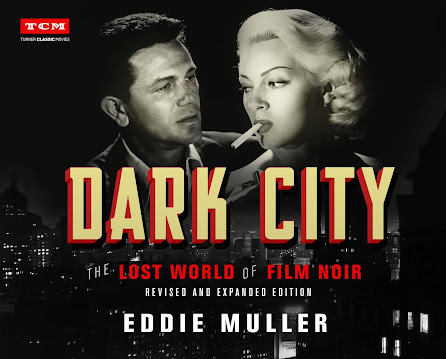 TVA: So, how long did Dark City take to research and write?
EM: Your referring to the original edition, right? (Editors notes: from the 1998 edition)
TVA: Yeah.
EM: That's a good question. I would say probably...Well, here's the thing the actual knuckle-down research was probably a couple of years. But, these were movies that I had been quote, unquote collecting in my head since I was a teenager but to really get into the back story and stuff I would say it was about two years. And, what was interesting Mike is that I did all that, it was all pre-digital (laughs) when I wrote the first edition. So, as I said in the authors notes in the new version it was a challenge to just find these movies because a lot of them were not on tape. I luckily developed a network of hardcore film fans around the country who made it their life's work to record everything on television broadcasts. Cause there was stuff that wasn't yet available on any format be that VHS or whatever. And these guys would just send me these care packages. I put out a message in a bottle saying stuff like, "I need to see City that Never Sleeps, who has a copy?" (Laughs) and a week later I would get a care package with a VHS tape inside. So, that was how the research was done for the first one.

TVA: Wow, thats great. That actually sort of ties into my next question which was pre-Internet what other resources did you use? Maybe such as the Library of Congress?
EM: At that time I did not make use of the Library of Congress. I was not 'czar of noir' guy at that time that could. I basically just convinced Saint Martins to publish a book on noir and that was it. At that time my name did not hold any cache. It didn't open any doors (laughs) what so ever. So, I did do a lot of research at the Margaret Herrick Library at the Academy of Motion Picture's Sciences. But, honestly I'm one of those guys that climbs old bookstores. They are some wonderful stores on the San Francesco Bay area where I would just go in and find film books that were totally out of print. Some of these books were printed at the time of the movies release. I found it fascinating to get a kind of on-the-spot view of what was happening as opposed to hindsight from a supposed 'scholar'. So that was really it. The bibliography is pretty extensive for a reason. Because thats where most of my research came, which was from books.
TVA: At this point (during the writing of original release of Dark City) in your career were you interviewing people involved in the making of these noirs or was that later on?
EM: That's an interesting question. Expect for a few examples, Abraham Polonsky was probably the major one who I did get to know about and he gave me a lot of background info. It really helped inform my approach to the material. Because he really was a born skeptic and was a pretty cynical character (laughs) and that impressed me lets say. But, it was the book that lead to my being asked to program a film festival in Hollywood for the American Cinematheque. That's when I started to meet all the people connected with noir. That's another reason why I wanted to do another edition, because now I have collaboration, I have actual input from the people that made these movies. The original edition is how I got to meet people like Jane Greer, Lawrence Tierney for better or worse (laughs) but yeah, that all came later, after the first edition.

TVA: Speaking of, what can fans expect from this revised edition?
EM: When I presented my proposal for my book originally to Saint Martin's Paperback division I did propose three additional chapters -no actually I think it was four additional chapters. They came back and said, "We can't make a book this big". (Laughs) So, I had to sacrifice the chapters in this new additional, I had not written them but just prospering them. This would have included a chapter on the city desk, about newspapers and the prisons and the stage door which is about showbiz noir. I had also proposed and I forget what the chapter was supposed to be called but it was about noir set in foreign countries. Hollywood noir but they were set in foreign countries. Films included Bribe, Calcutta, sort of the faux-exotica that Hollywood brought to foraging countries. But, honestly that I realized was outside of the city limits (laughs) so to speak, right? Like, I created this whole fantasy of dark city being a real place and then I realized why am I suddenly requiring a passport to go aboard for this. It just didn't seem to fit. So, I just left that one out. Then of course every chapter of the new addition has additional material. Some stuff I actually trimmed down. When I wrote the book originally I honestly didn't know that there was going to be, and I'm going to use the term, this renaissance in film noir. (chuckles) I certainly didn't know I would have a own t.v show presenting film noir. But, I honestly didn't know how familiar people would be with the movies. So, I tend in the original book to rehash the plots quite a bit. Now I feel like with the show and everything else I can cut that down. For example, my section on Out of the Past in the original book was really long. I must have spent like four-hundred words just describing what happens in the movie. I realized that that wasn't a good idea. I mean some of those films I honestly didn't think would ever re-surface so why not recapitulate it. Now I cut a lot of that out which in turn gave me a lot of room for material and films and info on the writers, directors and performers.
TVA: You`ve of course written a lot of non fiction but you`ve also written some excellent fiction. Do you prefer one over the other?
EM: No, I actually don't. I will tell you that its much easier for me to write non-fiction than it is to write fiction. I apply myself to both but fiction is a totally different approach where your just making things up. Non-fiction the road map is easier to see. For example, you know I'm sitting here right now as we talk I'm writing an introduction for Noir-Alley for the film Brighton Rock. In that case I know what needs to be said. (Laughs) I'm gonna talk about Richard Attenborough I'm gonna talk about John and Ron Boulting,  I'm gonna mention the back story of Carol Marsh who played a character in it etc. I know all that stuff so I can see the roadmap. With fiction you can go anywhere and do anything. So, that is a bit more daunting. It didn't come out quite as freely as now fiction stuff does.
TVA: So, you would say fiction takes longer for those reasons.

EM: Absolutely. The third Billy Nichols novel  I've been working on it for like 12 years. I would definitely say that it takes longer to write the fiction. I've also written a lot of short stories and thats kind of a different thing. A novel is an epic. It takes years for me to get into it. A short story is different because it sometimes they can just come to you in a flash and it's like, oh, I get it because it's like a big extended scene or something, so you can write that pretty efficiently. It doesn't take as long as or, what I mean to say is very often my short stories may take me two or three days, as opposed to weeks or months, or in the case of the new novel years.
TVA: I'm curious if anymore of your books will be getting a re-release, such as Dark City Dames?