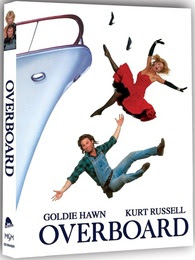 When Severin announced that they would license the MGM film Overboard (1987) many fans of '80s cinema was 'over' joyed while some others were upset that they went "mainstream". But, you know what? Severin has for decades now put out quality off-beat cinema and I would argue Overboard fits snuggly into that category. A rich woman named heiress named Joanna (Goldie Hawn) hires Dean (Kurt Russell) to fix her boat. She has a pretty bad accident which leaves her memory completely wiped. Dean, decides to gaslight Joanna into thinking they are married and in order to have someone to take care of himself, the house and his house full of boys. Meanwhile, her real husband Grant (Edward Hermann) sees this as a chance to leave Joanna and plays along. And, because it was the '80s this is a screwball comedy!

I have to say that I am DEEPLY fascinated with Overboard. Not because its a great or hell, even good movie but just how strange it is. I have to say from the outset the plot of Overboard is one of those "played-for-laughs" narratives that if you even take a few seconds to really think about is deeply upsetting. It's basically about a psycho that gaslights a woman and tricks her into being a servant to his brats who display many MANY warning signs of psychopathy. Here's the thing though. Creator intent is very important when re-evaluating any work of art and, Garry Marshall and Leslie Dixon (a female creator) did not I'm sure see this as dark or disturbing. Its worth noting that Dixon screenwriting credits include many classics including: Mrs. Doubtfire (1993), Freaky Friday (2003 remake) and Hairspray (2007) (musical remake).

As for the movie itself, while I'll be totally honest the comedy is a bit too all-over-the-place board I do find it has some '80s charm. Goldie Hawn and Kurt Russell add a special magic to the film that, in my opinion is the glue that holds the movie together. Each has their own moments to shine but together they really have on-screen chemistry. It has a great supporting cast as well including the late great Edward Hermann who is perfectly cast in the role. Also includes Roddy McDowell who is always a win in whatever he's in. I am a fan of screwball comedies from the '30s and '40s and Marshall and Dixon are clearing paying loving homage to those earlier films. Overboard is a movie that seems odd for Severin but I was argue its not- the movie was a weird, even subversive '80s film that just so happens to be made with a budget and big named actors.
Picture: Overboard was previously re-released in 2018 and now gets a brand-new 2k scan for 2021! Right away I noticed that the image has a consider brighter presentation. Colors and picture thankfully don't look over processed. Hues are not garish and this restoration feels in line with the films visual palate. Grain is heavy but looks overall well distributed throughout. Skin tones have a nice natural look and, in my opinion has a sharper edge over the previous home video release. Really well done overall.
Sound: Overboard has a DTS 2.0 track. Dialogue comes through nicely and, no shocker the sound design is handled extremely well here.
Extras: Overboard was previously released bare bones from Mill Creek but Severin has provided a brand new interview with screenwriter Leslie Dixon. Titled Writing Overboard (14mins) Dixon talks about getting her start into screenwriting. Its a really awesome candid interview and Dixon is engaging as a interview subject. Also included is a trailer.
Posted by The Video Attic at 7:52 AM