Plot Summary: A "spiritual sequel" to the horror film Candyman (1992) that returns to the now-gentrified Chicago neighborhood where the legend began. 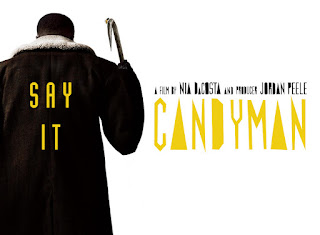 Nia DaCosta’s 2021 “spiritual sequel” to the 1992 Candyman is, outside of Halloween Kills (2021) probably the most anticipated genre movie for a lot of people, myself included. So, when I was invited to a press screening, I jumped at the chance to see it Tuesday evening. It was also the first time back to the movie theaters in almost two years. 1992’s Candyman had a pretty big impact on me in terms of early horror cinema (I was seven at the time of its release). Just like in the movie, the myth of saying Candyman’s name in the mirror became fodder for maybe childhood dares. I only mention this because this is because the original is a movie that I firmly grew up with and had it planted in my grey matter. Hell, I even met Tony Todd a few times. But, as always, I am not one for hyperbole and I will give you my totally honest and un-bought reflections.

Visually, this movie is creative and at times, downright stunning. Production designer Cara Brower (who is currently working on The Marvels with Nia DaCosta) really does a jaw-dropping job. Brower and DaCosta clearly put a lot of love and careful consideration with the entire films look and feel. Little details are sprinkled throughout making repeat views a must. Keen eyed viewers will notice the colors yellow and various browns are expertly and meticulously incorporated. Even the shadow puppet silhouettes are cleverly echoed in blink-and-you’ll-miss-it ways. As someone who has seen a lot of film, I certainly can tell when a lot of thought, care and love go into a project. Candyman is an oppressive feeling and stylish tour-de-force. Cinematographer John Guleserian (who is working on the infamous “Cocaine Bear” film) does some pretty bombastic camera work that feels like it vibes with this off-kilter world that DaCosta has crafted. Furthermore, the score, sound design and cast are all excellent.

The movies biggest weakness sadly lies within its screenplay. The movie has three screenwriters and frankly at times it shows. It has a lot of interesting, even brilliant ideas. Some of them feel organic and others feel awkward and ham-fisted in. This is tricky to keep spoiler-free, so going forward I will be as vague as possible in certain areas. The movie telegraphs right from the first few seconds that this movie has a lot to say about racism in America and the incredibly vile way cops treat people-of-color. This is very much a worthwhile stand to take, especially in the context of Candyman, which was always about race, intolerance and victimization. (Though, side note: re-watching the ‘92 version does feel tone-deaf when it comes to these deeper social issues.) Instead of this being the narrow focus, the movie instead also appears to take a biting, satirical look at the world of elitist artists. This is woven into the narrative pretty significant but is seemingly dropped midway through. Also, a presumed throw away character (even set up as a possible victim) actually turns out, out of nowhere mind you, to be hugely important to the third act. This is not prompted by set up in the plot and, it felt jarring like key scenes were missing. It also really leans into the nostalgia factor, hard! Like, it is a movie that wants to have its cake and eat it too. It finds a way to bring elements from the ‘92 film into this Universe but also tries to be its own thing. This kind of works, but it also feels like the worst kind of fan service that isn’t truly earned. It takes away from this being a truly unique offering. Sure, there were things that were fun to see but it never gives itself room to just be a new entity. I will give screenwriters credit for finding some fun ways to subvert tropes.

Candyman (2021) is no doubt a staggeringly beautifully crafted movie that sadly feels weighed down by its pacing and screenplay. You will no doubt read reviews that this is the greatest movie ever. In fact, moments after leaving the theater, other early press were tweeting pretty much just that. Candyman will please a certain sub set of fans, namely people of a certain age that enjoyed the original film. However, the movie is narratively messy. What we’re left with is a movie feels very much like film with creative ideas saddled with studio mandated trappings. Also, seeing it with a crowd, not a single person screamed or even startled which isn’t a good sign for a what at the end of the day is a horror film. Candyman is still a powerful movie but sadly, at the end of the day, this is an interesting yet very messy confection.