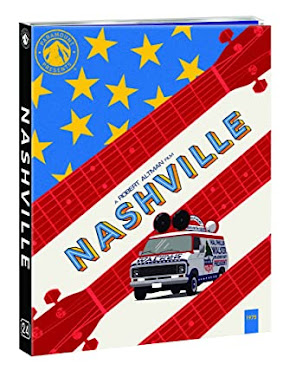 Disclaimer: Paramount Pictures has provided me with a copy of this film free of charge for the purposes of review. All opinions contained within are my own honest reflections.
Other Paramount Present Reviews:
Mommie Dearest HERE
48 Hrs.  HERE
Another 48 Hrs. HERE
Last Train from Gun Hill HERE
Considered his masterpiece, Robert Altman's Nashville (1975) tells multiple stories revolving around the Nashville music scene.  I confess I wasn't a fan of Nashville when I first saw it. This was very early in my exploration of Robert Altman and I just found the movie to be...a lot. Later on when my taste in movie matured I re-watched Nashville and I saw it in a completely different light. I think that most people not very familiar with Altman's style to find the film to be bit daunting. After all the movie is nearly three-hours long and has a dizzying amount of characters and plot threads.
The brilliance of Altman's film is it truly acts as not only a time capsule of American life and music in the mid '70s but also acts as a nearly perfect satire of Americana, politics, the music industry and music stars. The movie is of course jam-packed with amazing actors including but not limited to Lily Tomlin, Karen Black, Shelley Duvall, Ned Beatty, Jeff Goldblum,  and Elliott Gould as himself. This movie is overflowing with talent and its always amazing to see these huge ensemble pieces. Everybody is given their time to shine and, it feels like everyone is on the exact same page.
Altman was at the height of his creative power in the '70s and Nashville comes off his streak of hits like MASH (1970) and The Long Goodbye (1973). The film is a perfect blend of dry-sardonic comedy, music and compelling story. The scope of it is huge and its the kind of film that would never ever get made today.
Picture: Nashville has a new 4k scan. I have to say this is another slam dunk for Paramount. The visuals have a nice refreshed look with colors that pop and everything has a nice sharp defined look. Locales, costumes and sets really stand out with this new 4k scan. The color tempt. is handled extremely well and things thankfully dont look over worked nor do they look washed out. Grain is also maintained really well and isn't chunky. I don't think this has ever looked this good on home video before.
Sound: Nashville has a DTS 5.1 track. The movie is filled with music and I love that the movie gets that extra kick. The musical numbers have a really nice huge sound on a 5.1 track and though the movie doesn't have a lot of big effects the sound does have some good moments of 3D sound. Just like the picture, I can tell a lot has gone into making this movie literally and figuratively sing.
Extras: Includes a Commentary by Robert Altman. New feature 24 Tracks (15mins) A new featurette on the making of Nashville. Includes a archival interview with Robert Altman (filmed in 1999) and new interview with Stephen Altman (Filmed in Dec of 2020 via Home Computer) The production assistant and Robert Altman's son.
Also includes a trailer.
Posted by The Video Attic at 9:07 AM