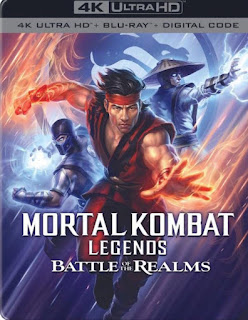 Plot Summary: Mortal Kombat Legends: Battle of the Realms picks up shortly after the explosive finale of Mortal Kombat Legends: Scorpion’s Revenge, the 2020 blockbuster hit that initiated these animated films – which are based on one of the most popular videogame franchises in history. In Mortal Kombat Legends: Battle of the Realms, our team of heroes are besieged by the enemy forces of Shao Kahn – forcing Raiden and his group of warriors into a deal to compete in a final Mortal Kombat that will determine the fate of the realms. Now our heroes must travel to Outworld in order to defend Earthrealm and, simultaneously, Scorpion must find the ancient Kamidogu before it's used to resurrect the One Being – which would mean certain destruction of all things in the universe. Time is short and the stakes are high in this action-packed continuation of the Mortal Kombat journey.
It's been quite the year for Mortal Kombat fans. Not only did we get a new live-action film but also from Warner Bros. a straight-to-video animated feature MK: Battle of the Realms (2021). The movie picks up after the last film and I think overall, does a great job at continuing the mythos. Both Ethan Spaulding and Jeremy Adams return, which helps keep things feeling like a next chapter. As always the animation and action are, in my opinion, handled really well and the movie is able to be gritty but also still stay within the Warner Bros. animation house style. Most of you probably already know this but, this movie is R-rated and as such the violence is pretty heavy. I love how WB can embrace adult-animation in this way which is something you don't often get.
Narrative wise can be times shaggy but overall, I think Adams has a nice flare for writing great characters, I also love his at times sardonic sense of humor. Johnny Cage has some of the best dialogue. The cast is great with Jennifer Carpenter, Joel McHale, Ike Armadi and Artt Butler doing incredible work. Also, I think a lot of credit should go to the voice-director Wes Gleason. Gleason who has worked on many other animated features is in my opinion a major reason why the voice acting is so seamlessly executed.
Overall, a really enjoyable feature film that adds a bookend to the previous offering, Scorpion's Revenge (2020).
Picture: Warner Bros. has frankly been crushing it with there Blu Ray and UHD releases. They keep raising the bar in my opinion and are among the best studios with old and new catalogue titles. I have had the pleasure of getting to review their animation and its top notch. As mentioned in my review, MK has a very nice visual style and this upgraded release truly showcases that. The sleek animation style has a nice sharp definition with edges that are crisp and clean looking. Speaking of, colors having a nice amount of depth and life to them. Small details really stand out and the overall image has a nice hue contrast.
Sound: MK: Battle of the Realms offers up a skull-crushing DTS. 5.1 track. Like the visuals I feel like the sound really does a fine job. This is of course a very action driven film and, in my opinion, a very complex and 3D audio presentation.
Extras: Included on the Blu Ray is:
The God and the Dragon: Battling for Earthrealm (Featurette) – Go behind the scenes and inside the creative process of bringing Mortal Kombat Legends: Battle of the Realms to action-packed life on screen.
Voices of Kombat (Featurette) – Join Joel McHale, Jennifer Carpenter, and the cast as they detail the process of creating unique and compelling voices for the larger than life characters in the film.
Kombat Gags: Gag Reel (Featurette) – Step inside the VO booth with the cast of the film for all of the flubbed lines and outrageously improvised lines from the cutting room floor.
Mortal Kombat Legends: Battle of the Realms Audio Commentary (Audio Only) – Producer Rick Morales and Screenwriter Jeremy Adams take the audience inside the art of writing and animating the film in this feature length audio commentary.
Optional English SDH, Dutch, French, Latin-Spanish, and German SDH subtitles for the main feature
Posted by The Video Attic at 9:16 AM