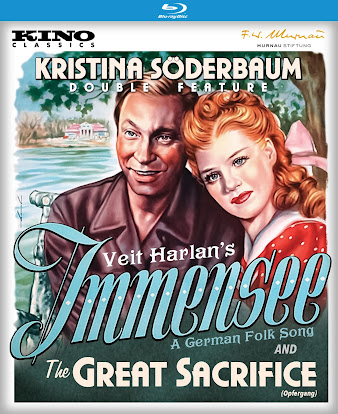 I went into both Immensse and The Great Sacrifice totally blind, only knowing they were German films released during WWII. The film loosely based on a novel of the same name follows a seemingly doomed romance between the sweet and innocent Elisabeth (Kristina Soderbaum) and a renowned composer named Reinhart (Carl Raddatz).

With a lot of German movies from this period I always feel automatically uncomfortable knowing these films were made under the Nazi regime. Indeed, the movie leans heavily into themes of the ideal woman and how she must make certain sacrifices. Its hard to divorce the movie from the conditions it was made but, thankfully the movie doesn't feel like outright propaganda. The movie is somewhat of a mixed bag for me. The acting is great, as are the photography and use of locales. And, the music is also for the most part a nice layer. Still, the movie is sappy, and the characters are a bit on the flat side. Moreover, there are some pretty cringe-worthy moments as you might expect, especially with a movie that deals with gender politics from the '40s. Also, as much as I enjoyed the music, some of the cues are a bit over-the-top even for a romance film.  Immensse may not entirely work but it is important to have a historical document of a very specific time, place and wrongheaded ideals of a nation.

Picture: A title card for Immensse reads: Two separate versions of Immensse was created for its initial release. Each was assembled from the original camera negatives, which sometimes differed greatly in terms of content and composition. An Agfacolor print of one these versions has been preserved by the Bundesarchiv-Filmarchiv. It was the basic for this 2015 restoration by the Friedrich-Wilhelm-Murnau-Stifung. Labwork was performed by ARRI Media in Munich.

I have to say that this restoration really is impressive. The colors feel like they are really well handled and the film has a sharpness and clarity overall. There is some artifacts and some slight color temp flux but this is no doubt due to the films condition. I also cut some slack for a movie that is over seventy-years old at this point. Grain is smoothed throughout and you can tell a lot of clean up and work has gone into this film.

Sound: Immensse has a strong DTS 2.0. Dialogue comes through nicely as does the music. No unwanted background noise or hiss which tends to be an issue sometimes with older films.

Extras: Extras include a great commentary by historian Olaf Moller. Moller has done other tracks and adds a nice amount of historical context to the film.

1944'sThe Great Sacrifice was directed by Veit Harlan and starring Kristina Soderbaum and Carl Raddatz and released a year after Immensse. The film follows a doomed love triangle between a married woman who is dying of typhus. Fun! So, I admit that I am pretty new to German cinema, especially ones made during the height of WWII. Thankfully, this film much like Immensse doesn't lean heavily into Nazi propaganda. Though, it does have some Nazi ideals such as a woman's place in the home not to mention literally quoting Nietzsche. Cringe-worthy gender politics aside the movie is a pretty compelling drama with really good acting from all involved, especially leads Kristina Soderbaum and Carl Raddatz. Have have a natural ease and chemistry that come to life.

Harlan also really does a good job at directing and showcasing some really excellent set pieces. His use of outdoor locales are also well done. The cinematography is well done and the way shots are composed and blocked are well thought out. Big bold colors are also used effectively. Though, as you can no doubt tell from my very brief summary the movie is riff with melodrama that reached near operatic levels. I will say that you will either be here for the drama and bleakness or you`ll find it a slog. The movie does get pretty bleak but it never feels like its a depressing watch and most of the film is actually fairly light until the third act. Out of this and Immensse I think Sacrifice is the better of the two but both has there high and low points.

Picture: There is a title card about the restoration that says: Two separate versions of Opfergang were created for its initial release, each of which differed slightly in content and composition. Preserved by the Friedrich-Wilhelm-Murnau-Stiftung in Wiesbaden are the original camera negative and a duplicate sound negative of the secondary version. These assets were the foundation of the restoration preformed by the Friedrich-Wilhelm-Murnau-Stiftung in 2015. Color-grading was reference was an Agfacolor print preserved by the Filmmuseum der Landeshapuptsadt Dusseldorf. One missing scene was replaced with footage from a print of the primary version, with severely faded colors.

Like Immensse, The Great Sacrifice looks great. Colors well showcased and really pop out. Skin tones look natural and locales have a stunning beauty to them. Grain is actually not that heavy thankfully and artifacts and noise have for the most part been totally cleaned up. Its a print that clearly a lot of hard work went into and for film fans and scholars alike its probably the best its ever looked.

Sound: The Great Sacrifice has a nice DTS 2.0 track. Dialogue comes through strong as does the films score.

Extras: The Great Sacrifice  has a commentary by historians Alexandra Heller Nicholas and John Nelson. I am a big fan of both these historians and they do a great job at providing a really engaging and well researched track. Anyone interested in a deep dive into this film will want to listen to this after your initial viewing.

Final Thoughts: So, I typically don't do these for single releases, only for big box sets etc. However, I do when I feel like I have more thoughts/feelings on the films. I am pretty reluctant to watch German films from WWII era because I don't want to sit through what feels like gross-propaganda. It's true the director of both of these films made some infamous anti-Semitic films and therefore I felt bad for even praising the directors work. But, I was tasked with reviewing these films in the context of singular art that sadly was made by a incredibly awful person. I said this in my review but its worth repeating, both films are not Nazi propaganda even though some of the ideals do creep in. You cant really divorce the propaganda entirely from German era cinema from this period but thankfully these films were more for entertainment and not for brainwashing. I also think death of the author very much can be applied here. I have been pushing myself to explore more world cinema from the '40s and '50s and that sadly sometimes means having the baggage of when and how these works of art came into being. Most film scholars, critics and film fans understand that I can like aspects of these movies without agreeing with the underlying politics.