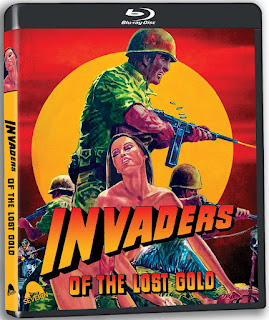 1982's Invaders of the Lost Gold packs enough fire power and action in its first ten minutes than most in its entire runtime. Though it takes a little while to get back into the meat of the action the movie is an enjoyable piece of low-rent cinema. The plot of Invaders is pretty straight forward and tells the story of a rag tag group lead by the rough-and-ready Mark Forrest (Stuart Whitman) and the smug wealthy Rex Larson (Edmund Purdom).
As mentioned above this movie has a hell of a fun opening sequence and is followed by a breath before some more action. Then the movie sadly slows down to almost a crawl and director Alan Birkinshaw sets up the plot and tries to flesh out characters. This is all well and good but the movie tries lingers on sub plots like the history between the rich, smug Rex Larson and our "hero" Mark Forrest or a forced love interest for Mark. Honestly, the movie isn't well written enough to support these extra threads. Because we are all just here for action, bare flesh and some splatter. You can feel that Birkinshaw is padding the story with pointless scenes that don't move the plot forward.
The cast is actually pretty excellent. Stuart Whitman is a really....interesting choice for a leading man in an action film. The Oscar nominated actor (yes, you read that right) was over fifty (but looks over 60 maybe due to hard living) years old during and not in what would be even close to peak health. But, I actually think that is kind of an awesome subversion of the action genre. Edmund Purdom who is probably best remembered for his role in the cult-classic Pieces (1982) is really excellent as the sleazy money driven bad-guy. He truly makes a meal out of his role and I adore it. Its also amazing to see Woody Strode in this. Strode's credits include Spartacus (1960), The Man Who Shot Liberty Valance (1962) and The Ten Commandments (1956) just to name a few. Strode's is great although he, in my opinion isn't given enough to do to really shine. Also includes Glynis Barber, Harold Sakata and Laura Gemser.
Invaders of the Lost Gold feels like pulp action-adventure of the '40s updated with grimy sleaze, sex and gore. A jungle orgy of babes and blood not to be missed.

Picture: Severin never ceases to amaze me when it comes to presenting really stellar looking transfers. Invaders of the Lost Gold is nearly forty-years old yet, shines like its metallic namesake. The image has an overall clear and crisp look to it. Colors really pop but thankfully isn't over processed or saturated. Skin tones have a nice natural look. Outdoor scenes really impress with a beautifully lush look that has a lot of depth. Grain is present but I was actually really stunned that its present but very smooth no doubt thanks to the new 2k scan. Only a few moments that look a bit rough but the bulk of the film really is fantastic.

Sound: Invaders of the Lost Gold includes a DTS 2.0 track. Dialogue, score and sound design has a nice healthy sound to it. Like the visuals the sound really impresses.