Summer may be almost over but its still a perfect time to grab a good book and discover or re-discover some classic cinema. I had the extreme pleasure of interviewing author John Malahy who wrote the fabulous book Summer Movies: 30 Sun-Drenched Classics. 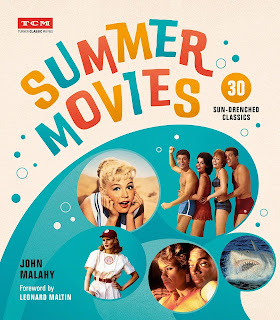 My Review for Summer Movies HERE

To Buy It Link HERE

How long did the entire process take from concept to finished book?

It took a couple of years from start to finish. I originally brought up the idea in a pitch meeting in mid-2019 but I hadn’t intended to write the book myself. I’ve worked on many other books that TCM has published, and normally there are a few months of development at the beginning, determining what we want the content to be, looking at similar books (if there are any) and how they’ve treated the subject. So I was working on this for Summer Movies and at a certain point I had gotten so wrapped up in it that I just decided to try to write it myself. It was my idea and I wanted to see it through to the end. So the writing really began in earnest in the spring of 2020 when were all at home in quarantine. It was a strange time for everyone, but it turned out to be helpful in terms of writing since I had fewer distractions. The manuscript was finished by late summer, then the editing and photo layout stages took another few months.

TCM had done a nice book on Christmas movies, and one on Halloween, so I was looking for other season-oriented ideas. Our traditional notion of a “summer movie” is a big studio tentpole, popcorn blockbuster, but there are also a lot of films that are set in the summertime, that show characters on vacation or hanging out at the beach, or sweating it out in a hot city, and that no one had ever really put a spotlight on the season as depicted by Hollywood. I had loved movies like Jaws and Do the Right Thing for years and it seemed like a perfect opportunity to pull those and a few dozen other movies together under one heading. I also liked the idea of giving readers some inspiration for their own summer adventures – I love to travel and a lot of these movies were inspiring to me because of the places and experiences they depict.

Can you explain a little about the process of selecting which films would be included?

Like Jaws and Do the Right Thing, there were a few movies that just had to be included. I’m thinking of The Endless Summer and National Lampoon’s Vacation, as well as the Katharine Hepburn movie Summertime. Those are already a diverse bunch and I wanted to lean into that diversity, so I cast a wide net. After asking around (the team at TCM is extremely knowledgeable) and doing some research I came up with a long list of about 300 titles. And then I started to trim it down, using certain parameters: I wanted each movie to be set during the summer (sorry, Grease), to show a relatable experience (Dog Day Afternoon doesn’t quite work) and most importantly to be good enough to recommend (I wouldn’t push Corvette Summer on anyone). I also wanted to show a range of time periods, so the book covers everything from silent film to movies made just a few years ago (Call Me by Your Name) and everything in between.

Did you watch many films in order to narrow things down?

There was a two or three month period where I all did was cram on summer movies, mostly things I hadn’t seen before – or at least hadn’t seen in a long time. I was also watching familiar movies in a new context – like Caddyshack, which at least ostensibly is about a kid getting a summer job to pay for college. In a lot of cases I was trying to find good representatives of a genre or cycle, so I watched lots of baseball films before settling on A League of Their Own (like The Natural, Take Me Out to the Ball Game and Bull Durham) and several Andy Hardy movies before arriving at You’re Only Young Once. I was fairly certain I was going to include The Endless Summer, but it didn’t stop me from watching other surfing documentaries like Riding Giants and Step Into Liquid.  There were a few French movies (like Claire’s Knee and Swimming Pool) that I considered, but ultimately passed on, and I watched all the Gidget films - but the original is clearly the best. All in all, it was a pretty fun research process!

Any films that just narrowly made the list but ultimately wasn’t included?

Funny enough, the first movie I wrote about was ultimately cut. Alfred Hitchcock’s The Man Who Knew Too Much (1956) with Jimmy Stewart and Doris Day is about a family vacation that goes off the rails. Way off – they get pulled into an international espionage ring. I loved that it showed these fish out of water Americans exploring the world – there were a lot of such movies in the 1950s – and I think everyone could relate to the family vacation that goes awry. But it was later swapped out for another Hitchcock movie, Rear Window, that was explicitly set in the summer and couldn’t have taken place at another time of year.

For each of the main entries, I also suggest a second film to form a double feature. So a few of the runners-up made it in that way. Those include Body Heat, Two for the Road, and The Palm Beach Story – all great movies, but they just seemed redundant or not as essential as the main films. I also was looking at a few horror films, like Friday the 13th, but I think they just didn’t quite fit the tone.

You have so many excellent movies included in this book. Which would you say you re-visit the most?

Of the thirty movies I write about, I’ve probably seen Rear Window the most. It’s endlessly fascinating and will never get old for me. A few others, like Jaws and Vacation, are movies I have to watch every summer. That’s probably true for a lot of people. I also have a soft spot for The Music Man, because the music is so witty and Robert Preston is an incredible performer. A couple of the more romantic movies - Before Sunrise and Call Me by Your Name - are also all-time favorites.

If you had to describe what makes a perfect summer film what would it be?

I think the archetype is Gidget – a young person spends her summer at the beach, has a life-changing experience, and falls in love. It’s a Technicolor film shot in Malibu and the tone is just what you expect from a summer film made in Hollywood. It also helped introduce surfing to a wider audience, so it’s historically significant.

A lot of these movies are about getting out of your routine, meeting new people, and gaining a new perspective on your normal life. In terms of the setting, I think the perfect summer film depends on whatever experience means most to the one watching, whether it’s set at the beach or at a summer camp, or – for me – a European trip like the one in Summertime. That particular movie was shot in Venice, and that’s a place I dream of going to every year.

What upcoming projects can fans expect?

I’ve just started a deep dive into 80s movies. We’ll see if it turns into a book and what that looks like at a later date. In the meantime, I’ll be working behind the scenes at TCM on some other books, including a few releases this fall on Hollywood during World War II, the history of 20th Century Fox, and a book on essential directors.