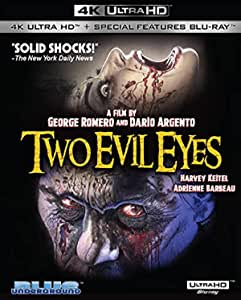 George Romero and Dario Argento seems like an odd but somehow perfect pairing. Both would make their respective marks on the horror genre in ways that are still felt decades later. The two maestros of horror  would collide years before Two Evil Eye's (1990) all the way back to Dawn of the Dead (1978). Flashforward over twenty-years later the two respective geniuses brought a very interesting double dose of horror! The film features two adaptations of Edgar Allan Poe as told by Dario Argento and George Romero respectively. The first story directed by Romero titled The Facts in the Case of Mr. Valdemar centers around a gold digging woman played to the hilt by Adriene Barbeau and her scheming doctor/lover. I love that Romero is tackling a largely unknown Poe work. Though it's narrative is somewhat on the convoluted side the segment shines with the directors gleefully macabre sensibilities makes it feel very much like an unproduced Creepshow (1982) entry. The late great masters use of lightening and camera work is strongly felt. Visually the Case feels like a EC love letter (as was 1982's Creepshow of course), with Atkins playing an cop straight out of the ’40’s and the horror amped up to eleven. While the movie may lack depth and a strong story I think Romero knows exactly what kind of movie he's making and just has a lot of fun with it. The other thing that is wonderful about this segment is the amazing cast. You also have Romero's usual suspects like Tom Atkins, EG Marshall and of course the lovely and talented Adriene Barbeau. Barbeau plays Jessica and really has a wicked good time digging her heels into such a nasty cold character. Plenty of chills and thrills to be had.
The second segment directed by Dario Argento entitled The Black Cat, adapted from the Poe story of the same name, centers around a sleazy reporter whose life is turned upside down when his wife takes in a black cat. Probably better known of the two stories this adaptation is visually more interesting than Case but narrative wise is more challenging as it takes a swift turn into bat-crap crazy town which might alienate some viewers. But honestly if you know and love Argento it wont be that much of a shock. I think I enjoyed this one the most and I liked that Dario’s trademark visions and his garish murders are on full display. I also found this incredibly disturbing at times. The domestic abuse and simulated animal abuse is unnerving probably more so than the murders themselves. The cast is great with Harvey Keitel playing…well Harvey Keitel. It also features Kim Hunter and Martin Balsam with a very funny cameo by Tom Savini. Huge gaps in logic aside this is a solid segment. Overall, I enjoyed Two Evil Eyes more I think upon re-watching. True it has some issues writing wise with some major suspensions of disbelief but if you are a big fan of both directors I think its easy to forgive those as they are both very true to their own respected visions.

Picture: When comparing the 2019 release to 2021's I can say without a doubt that this is a great leap forward. Blue Underground has taken steps to retain both directors segments visual color palate whilst also bringing things up in terms of image quality. Right off the bat Romero's segment looks stunning and has a rich warmth hue to it but also I noticed right away the depth and sharpness of the image really pops out. Details in set design, locales and Barbara Anderson's costume work really are showcased in all their glory. Argento's The Black Cat, like the first segment retains Dario's visual style of pop's of color and strange color hues but just freshens the image up. I think that BU has really taken the UHD game by storm and this is impressive.

Sound: Two Evil Eye truly impresses with a utterly strong Dolby Atmos track. The track has a nice complex 3D sound in my opinion and it takes great advantage of the sound design and effects, not to mention the excellent score. Like this picture, this is a nice upgrade to the previous edition.

Extras: Blue Underground has ported over the extras from the old DVD/Blu Ray release and also the newer features released in Oct of 2019. This includes:

Disc 1 (UHD Commentary by Troy Howarth Author or Murder by Design: The Unsane Cinema of Dario Argento (an excellent track ported over from the 2019 edition).

Its worth noting that this does not include the Soundtrack which was included in the previous 2019 edition.

The burning question from fans who already bought the 2019 edition is, it worth the upgrade? I think without a doubt if you are a Romero/Argento this is a must-have, in my humble opinion. I actually think owning both the 2019 edition and this edition is the way to go. If you don't own this already and don't mind not having the soundtrack it's certainly the edition to get. Fans may not want to double-dip but I think based alone on the upgraded picture and sound it's very much worth a purchase. Blue Underground has done a great job and you should consider these must-owns. I have been incredibly impressed by Underground's restorations and this does not disappoint.