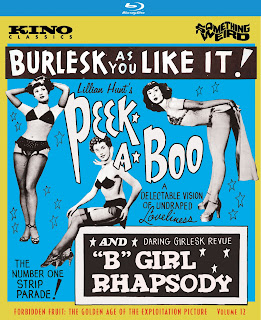 I will say from the outset that these reviews arent going to be overly long. Both Peek-A-Boo and "B" Girl are not films in the sense that they have a narrative. Rather, they are both filmed vaudeville performances. This offers a bit of a challenge when it comes to a review in the traditional sense. But, since I always take the time to watch, (and re-watch depending on commentaries) and report back to my readers I feel like I'm gonna give it my best shot!

Peek-A-Boo from 1953 captures a cheeky vaudeville shows. If you don't know what vaudeville is here is a definition from Wikipedia: Vaudeville (/ˈvɔːd(ə)vɪl/; French: [vodvil]) is a theatrical genre of variety entertainment born in France at the end of the 19th century. A vaudeville was originally a comedy without psychological or moral intentions, based on a comical situation: a dramatic composition or light poetry, interspersed with songs or ballets. It became popular in the United States and Canada from the early 1880s until the early 1930s, but the idea of vaudeville's theatre changed radically from its French antecedent.

So, now that you have a good idea of what vaudeville is lets talk about Peek-A-Boo. I admit that I had a passing knowledge of vaudeville and burlesque shows. Having watched twice (once and a second time with commentary) it's quite something. For a modern audience I think only hardcore fans of this artform will find it find this of real substance. I didn't hate it and I think it was pretty interesting to listen to the rather dated jokes (though some racial elements makes it super cringe-worthy). But, of course Peek-A-Boo is marketed to those looking for some titillations of the VERY old school variety. The dancing and music isn't sexy in my opinion but it does have a kind of kitschy camp factor that made it hard to not be transfixed. Even when this was filmed vaudeville was considered long dead having peaked in the '30s and by the '40s was out. In fact, on the '50s series I Love Lucy, the Mertz's backstory was they were a vaudeville duo and it was talked about like it was the stone-age time.

Peek-A-Boo is a boddy, cheeky, and sexy (only if you dont imagine this was someone's future Grandma stripping-or maybe it still is, no judgement here) film that preserves a artform that was a nostalgic trip for people of the era this was released.

Picture: SWV and Kino as always does a fantastic job with their restorations. Though the movie does have some rough edges you have to consider not only the movies age but also the condition of the original film elements. It has a noticeable uptick in brightness and clarity that really truly is impressive. You can say that the print isn't completely pristine but I think that would be missing the point which is, this is bar-none the best this has ever looked on home video.

Sound: Like the picture the sound is a much needed improvement. The film largely is cleaned of any unwanted hiss or distortion. Again, I think Kino/SWV deserve a lot of credit for preserving these in a great way.

Extras: Peek-A-Boo a commentary track by Eric Schafer author and historian. Schafer as always does a great job at taking a nice deep dive into the historical context. It's a wonderful crash course into this genre and watching it a second time w/the track helped me appreciate this movie more.

"B" Girl Rhapsody is in my opinion (and I am not an expert on this genre) gets more into burlesque than vaudeville (though they do overlap). Rhapsody focuses more on the art of the strip-tease but it also has skits like the previous, Peek-A-Boo. Again, this is a difficult thing to review in a traditional sense because this is doesn't have a traditional narrative. Also, while I have a passing knowledge, I am by no means a scholarly expert on burlesque (see the commentary for that) which later morphed into nudie cuties and later sexploitation.

I will say that I think this was more of an interesting watch because it focused less on some really dated humor. Also, I can really appreciate the artform of the strip-tease as a form of dance.

Picture: This film, like Peek-A-Boo has some rough edges in the print but it is by far the cleanest, clearest this has ever looked. You notice right away this is brighter and has a sharp clarity. This has been cleaned up considerably and if you are a fan of this you`ll want to upgrade it.

Sound: Also like Peek-A-Boo, "B" Girl has a crisp sound and is a big improvement over previous releases.

Extras: "B" Girl features a commentary track by author and historian and all around incredibly talented Alexandra Heller-Nicholas. Nicholas brings her brand of wit and well research and gives a wonderful in-depth look at the world of burlesque. I`ve been a really big fan of Nicholas's books and commentary tracks and she never disappoints when it comes to engaging and utterly staging knowledge on the subject. It really is a crash course into the genre and the key players. But, it never feels like a dull boring lecture. Extremely well done and worth listening to.