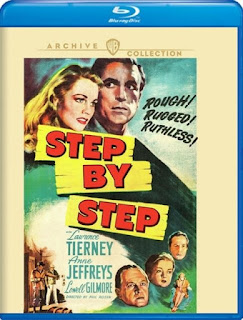 1946's Step by Step (not to be confused with the 90's sitcom)  is a B-Noir that I had actually never heard of until Warner Archive re-released this on Blu Ray. But, you know I am a sucker for any Noir especially with this colorful cast of character actors in the mix. Johnny (Lawrence Tierney) is a all American Marine coming back from WWII. He soon finds himself mixed up with Nazi spies living in California, not to mention a plucky woman named Evelyn (Anne Jeffreys).
As you might have surmised from the plot, Phil Rosen's chase-Noir tries to capitalize on a post WWII anxiety that their were still evil lurking among us. This is something that we would see a decade later with Cold-War style science fiction. Sadly though, the movie on almost all fronts is generic. Not only is the Nazi spy plot pretty basic but also at times needlessly complex. Step by Step also plays out like a low-budget Hitchcock film with some not so subtle nods to The Lady Vanishes (1938) not to mention the innocent-man-on-the-run motif is very much in the mold of the Master of suspense.
All this aside I actually think the movie has a lot of charm. The big attraction for me was Lawrence Tierney who rarely got a chance to play good guys. And, you know what? I think it really works. Tierney breezes through this movie with solid acting and charm to spare. Tierney reunites with his Dillinger (1945) co-star Anne Jeffreys and I think the pair are just fantastic together. The supporting cast is great with George Cleveland (Flash Gordon), Harry Harvey (The Pride of the Yankees) and Addison Richards (The Ten Commandments) just to name a few.
Also at a scant 61 minutes the plot moves at nearly break neck speed. It might have a rough-around-the-edges narrative but it's thankfully never dull. This coupled with some enjoyable performances I think this is a pretty great little Noir. It will never be on the same level as other's in the genre but I thought it was entertaining despite its flaws.
Picture: As always Warner Archive impresses with a flawless visual presentation. The black-and-white photography is wonderfully contrasted giving a lot of depth and clarity. Grain is smoothed to nearly undetectable and there isnt any artifacts or noise to be found anywhere in this transfer. It's simply a perfect looking print and WA as always dazzles with their restorations.
Sound: Step by Step has a DTS 2.0 track. Dialogue comes through nicely as sound design and score. No unwanted background noise which can be an issue with older films.
Extras: Step by Step includes the short subject The Trans-Atlantic Mystery (21mins) and a short cartoon The Great Piggy Bank Robbery (7mins)
Posted by The Video Attic at 7:54 AM