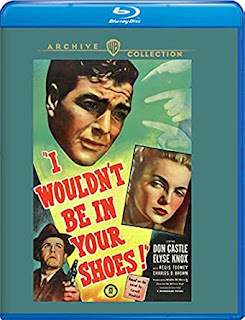 Disclaimer: Warner Archive has provided me with a copy of this film free of charge for the purposes of review. All opinions contained within are my own honest reflections.
For my other Noir Title Step by Step Click HERE
Warner Archive has re-released another little known film-noir. Tom Quinn (Don Castle) is a down on his late dancer who has been struggling to find work. His wife Ann Quinn (Elyse Knox) is helping to earn a living a dance-teacher. They think they finally catch a break when Tom finds a large amount of money but things quickly backfire. It seems that the money belonged to a murdered man and Tom's special dance shoes were found in his blood. The haplessly Tom is charged with the crime and his moments away from being executed. Anne must do anything to help prove his innocence before its too late, in this interesting little b-noir programmer.
So, I think out of the two noirs that WA released in July, this might be the one I think I would be likely to revisit. Whilst Step By Step was not a bad film by any means it didnt feel like a movie that was fleshed out enough to be really effective. Steve Fisher who was nominated for an Oscar for his screenplay for Destination Tokyo (1943) pens a pretty clever and sharply written little mystery-thriller that actually kept me glued the first few minutes. Fisher's script is mostly free of filler and is a lean, quickly moving film. He also peppers in some wickedly good ironies that give the movie some more dimension. It also takes a hard long look at the legal system which again, adds something more to what could easily been just a run-of-the-mill mystery film. There are also some moments with genuine pathos as well delivered by some solid actors.
Don Castle plays Tom and I think that the actor has a lot of natural talent and most importantly charm. It's kind of a pity that Castle never broke into Hollywood. He doesn't have the kind of talent of Jimmy Stewart of Cary Grant but he had a kind of "it" factor that could have taken him far. Like Castle, Elyse Knox never became a household name and I think she gives a layered and thoughtful performance. She has some moments that are truly heartbreaking and she sells every bit of a wife desperate to save her husband.
I Wouldn't Be in Your Shoes is a pretty awesome discovery and I think that its one that hopefully will find a minor following after this home video release. It's not groundbreaking but its a damn enjoyable and clever little noir that has surprisingly amount of depth and kept me engaged the entire brisk 71 minute runtime. Shoes will have any noir-fan dancing in the aisles for this release. Check it out!
Picture: Not a shocker but, Warner Archive has really done a fantastic job with this film. The film has a nice contrasting black-and-white palate that looks crisp, sharp and has a lot of depth. Small details in costumes, set design and locales really impress. Grain is present but smoothed and not chunky. No artifacts or noise that I could detect.
Sound: Shoes has a nice DTS 2.0 track. Dialogue comes through cleanly, as does the sound design and effects. Really nicely done.
Extras: Extras for I Wouldnt be in Your Shoes includes a Short Drama: The Symphony Murder Mystery(21mins)  and a Cartoon short: Holiday for Shoestrings (7mins)
Posted by The Video Attic at 10:00 AM