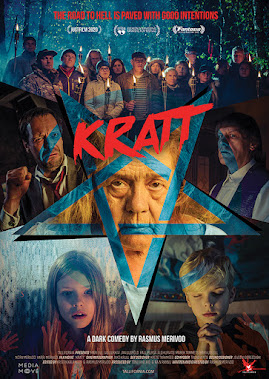 Plot Summary: Children are left at grandma's house without their smartphones. Real life seems boring until they find instructions for kratt - a magical creature who will do whatever its master says. All they need now is to buy a soul from the devil.

Fantasia Fest always is far and away one the best film festivals for genre cinema. With that comes a lot of great films from exciting up and coming filmmakers. But, sadly, they can’t all be winners. Such is the case with the Swedish fantasy comedy Kratt. Where do I even begin? Kratt starts out promising enough with a fairly brisk moving plot and a few jokes that land. Sadly though, this is short lived, and the movie quickly starts to unravel. One of my biggest issues is that Rasmus so badly wants to take a satirical look at youth culture and the Internet, but it’s not smart enough to be satire. They seem to flirt with this idea that the adults are just as tech-obsessed as kids, but this is never taken far enough to be effective, nor is it woven into the narrative. It also talks a lot about Facebook, which dates the movie right off the bat. Also, there is a strange bit of American satire by way of a march with tiki-torches, but this doesn’t relate thematically, the narrative nor to the actual events that are being satirized. Again, it feels like it’s trying to say something but it’s actually not.

Speaking of which, this plot is such a mess. I could tell that this was Rasmus Merivoo first feature length film. Kratt smacks of a first-time director wanting to put anything and everything into one film. The end result is an overly bloated and needlessly convoluted story. Seriously, there are subplots that are completely needless, as are characters, some of which aren’t introduced until well into the third act.

The titular Kratt doesn’t even get introduced until almost an hour into its runtime. It’s frustrating because I think that for all its problems, I could see a good movie there. Like, there is an entire major subplot about politics and cutting down a forest that has nothing to do with the Kratt. Tone-wise, the movie is also a mess and again, it comes down to Merivoo trying to add and mix too many elements. By the end the movie completely spins out of control, and it really feels like the script was being changed and tweaked during production.

I always try to say something nice about a film. I thought that for what the actors had to work with dialogue-wise, they are really solid. The stand out is Mari Lill who plays Grandma. The actor truly brings a genuine warmth that the movie lacks otherwise. I even think the children actors do a fine job, especially having to carry a lot of the film. Visually, the movie is also interesting and I can see how Merivoo is trying different things in order to channel his own style. Sure, this means cribbing from other filmmakers, but I can still see that there was a thought and effort behind the look and feel of the piece.

I’ll be blunt and say Kratt makes me mad because I think Merivoo shows talent as a director but is saddled with a screenplay that does a lot of heavy lifting it doesn’t need to. I just wish this movie would have been simplified. Had it just dealt with the children and the Kratt I could easily see this as a damn enjoyable indie outing.

Kratt takes a fairly interesting premise and buries it with so much extra plotting that the movie doesn’t need. Not worth nearly two-hours of your time.