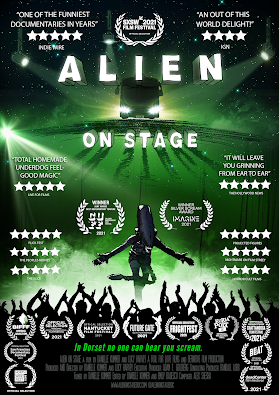 Plot Summary: A very amateur dramatics group led by Dorset Bus Drivers, spent a year creating a serious stage adaptation of sci-fi, horror film, Alien. Their village-hall show is a crushing flop; it seems their hard work was for nothing but fate gives them a second chance to perform their homemade homage in a London West End theatre, for one night only! With wobbly sets, awkward acting and special effects requiring ‘more luck than judgement.’ Will it be alright on the night?

Ridley Scott’s 1979 film Alien was a watershed moment in the horror-sci-fi genre. While it was by no means a low budget production (roughly $11 million) it has a kind of wonderful rough-and-ready, lived-in feel. Scott’s film frankly put a master class in expert plotting, great set and production design, claustrophobic cinematography, and of course brilliant acting. Flash-forward to a scrappy crew of Dorset Bus Drivers who planned to put on an Alien stage production for charity. I think it’s safe to say that we all adore a good underdog story, you know the kind where the little people get their moment in the sunshine. Directors Lucy Harvey and Danielle Kummer provide that and more with Alien on Stage, which can only be described as a real-life version of Christopher Guest’s Waiting for Guffman (which also featured a staged alien invasion).

The filmmakers do a great job at exploring this motley crew of loveable misfits. This includes the former military man Dave, who is stern but ultimately a loveable guy, and you can tell that this clearly means a lot to him. You have a nice, quirky cast of actors including Lydia Hayward, Jacqui Roe, John Elliot, Luc Hayward.  But, it’s effects wiz Peter Lawford with his infectious cheer and love for prop making that is the film’s secret breakout star. Visually, the filmmakers do this interesting thing where they replicate the Alien computer text to further bring home this loving homage to Scott’s film. It’s a nice touch that shows that real hard work and thought has gone into this project.

Aliens on Stage is also an incredibly breezy watch clocking in at a scant 83 minutes. This actually brings me to my one and only complaint. The movie seems weirdly rushed at times with aspects of the production that maybe could have used a little more fleshing out.

Unlike the ill-fated crew of the Nostromo, Alien on Stage’s intrepid crew not only makes it out in one piece but will have you cheering in the aisles for them. An enjoyable and joy-filled documentary that will have you completely engaged from the first minute until the credits roll. A must-watch.