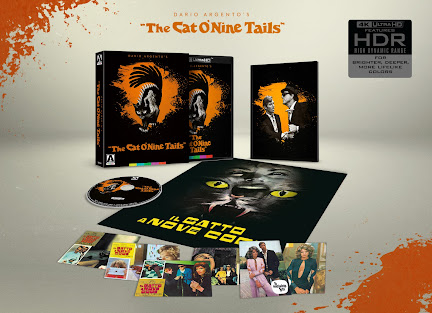 For my Review of Arrow's The Bird with the Crystal Plumage Click HERE
For my Review of Dead & Buried UHD Release Click HERE
1971's The Cat O' Nine Tails is the first of what would be considered Dario Argentos 'animal trilogy' which includes Bird with the Crystal Plumage, Nine Tails and Four Flies on Gray Velvet. It's worth noting that Velvet has yet to see a US HD release and indeed got a very limited DVD release in the States some years ago.
Argentos Cat O' Nine Tails is a kind of awkward footnote in the directors body of work. It's not as groundbreaking as his first feature Bird with the Crystal nor does it reach the heights of his later works like Deep Red (1975) and of course, what many consider his crown jewel, Suspiria (1977). While not nearly as loved as the aforementioned works I think that Nine Tails is an underrated entry into the Italian directors bloody-body of work. I can freely admit that the movie isn't as well crafted as later films but it does manage to weave together a razor-wired web of suspicion, weird through lines and of course murder. It's story isn't that groundbreaking but it has enough twists and turns and Argentos pension for bizarre side-stories that keeps it entertaining. Nine Tails isn't nearly as gory as the directors later films there is a intensity that makes the murders unnerving.
The cast is excellent with Karl Malden (On the Waterfront) of all people playing a blind man that gets caught up in the murder-mystery. Malden gives the movie a polish and whilst he comes very close he never goes full ham. It's in my opinion one of his better later in life performances. James Franciscus is also great as a plucky reporter who must team up with Malden to solve the case. The Cat O' Nine Tails doesn't have the kind of precession and grand-operatic style that other Argento films have but, I still think its a damn good mystery with enough sleaze, gore and twists to keep it ever-engaging.
Picture: There has been a lot of talk about Arrow's UHD releases and if they are worthy of upgrades. I really liked the face lift they gave to Plumage and, I think equally as good is Cat Nine Tails. I noticed right away that the beginning night scenes provided a much needed uptick in brightness and definition. Indeed the entire film has a nice balance of contrasting color with things like reds almost bursting off the screen. I will say that grain is a bit on the heavy side and images in the background tend to lose some sharpness. I still think this is the best this movie has ever looked, Similar to Bird, skin tones have a nice warm natural look to them and locales, sets and costumes stand out nicely.
Sound: Cat features a purrfect Dolby Atmos track. What fans can expect is, in my opinion an incredibly powerful track that showcases the off-beat jazzy score and top-notch sound design. I noticed how the sound has a nice complex 3D feeling and font heavy stuff like dialogue comes through nicely. Overall, this is a really great sound presentation.
Extras: Extras have been ported over from the previous HD release in 2017.
This includes Commentary by Alan Jones and Kim Newman, Nine Tails (15mins) A new interview with Dario Argento, The Writer O' Many Tales (34mins) New interview the co-writer Dardano Sacchetti.
Child Star (11mins) New interview with actress Cinzia De Carolis, Giallo in Turin (15mins) New Interview with location manager Angelo Lacono.
Also included is: The Original Ending (3mins), Trailers and Image Galleries.
Posted by The Video Attic at 11:12 AM