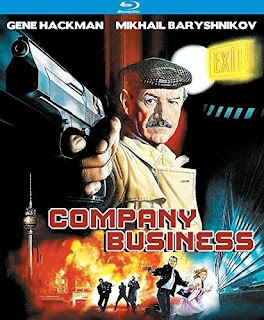 The Cold War heats up with Nicholas Meyer's Company Business (1991). The movie see's Rogue CIA Agent Sam Boyd (Gene Hackman) is enlisted back into action to trade a Russian named Pyotr Ivanovich Grushenko (Mikhail Baryshnikov) but all does not go to plan in this thriller. Critics were not very kind to this early '90s chase-movie but I put that all aside when I sat down to watch it. I have to say while the movie is far from perfect it was still a pretty fun and enjoyable bit of mindless fun. Sam and Pyotr make for a wonderfully odd matching and I really like how director Nicholas Meyer mashes up a chase movie, a spy thriller and a buddy-flick all in one. I think this could have been pretty awkward but Meyers attention makes it somehow work. I also have to give the filmmakers credit for having a light, sometimes dryly sardonic tone without going into full on parody or pastiche.
Now, I will say that the plot has holes and gaps in the logic but the movie but if you can move past that I think that this is a enjoyable and pretty lean little outing. Its pretty clear that Gene Hackman was a legend and even in his later films could command your attention. Here the actor who was sixty-years old (roughly) at the time of filming still manages to captivate an audience. Here his roughish charm is in full effect and I think his performance helped me smooth over the narratives rough edges. Mikhail Baryshnikov is maybe not as good as Hackman but the Oscar nominated actor (for 1977's The Turning Point) is a lot of fun in the role nonetheless. Mikhail hasnt acted in anything since 2015 and seems to have pretty much left the business. I think this is ashame because I think Mikhail plays well off Hackman and wisely he brings something different but compliantly. The film has a excellent supporting cast including Terry O'Quinn and the always amazing Kurtwood Smith.
Company Business isn't some forgotten '90s gem but I also think its a perfectly enjoyable spy-thriller that deserves a watch.
Picture: Company Business looks fairly good on 1080p. Colors retain a nice brightness and the overall picture has a nice amount of clarity. The print however does have some artifacts and noise throughout. Looking at the unrestored trailer you can certainly tell this is a big improvement over the previous releases.
Sound: Company Business has a DTS 2.0 track. Dialogue and music comes through nicely with no drop out or unwanted background noise.
Extras: Extras for Company Business includes: Out Country 'Tis of We" Featurette, Gene Hackman Sound Bites, Mikhail Baryshnikov Sound Bites, Nicholas Meyers Sound Bites, Steven-Charles Jaffe Sound Bites, Selected B-Rolls, Company Business trailer.
Posted by The Video Attic at 10:29 AM