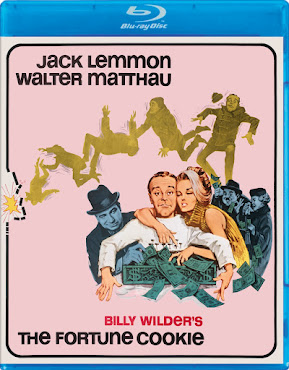 Please Note: I have not seen the previous Twilight Time re-release of this title, therefore I won't be comparing the two.
Billy Wilder...What is there to say, the man was a genius at any genre he put his energy to. In fact, in his career he won six-Oscars and made some of the most iconic movies including, Some Like It Hot (1959), Sunset Blvd (1950) Double Indemnity (1944) just to name a few. His later films tend to be not as well beloved but he had a few under-rated outings. 1966's The Fortune Cookie is a shall we say mixed bag.
A CBS Henry Hinkle (Jack Lemmon) gets injured on the job and is laid up. His shady lawyer brother-in-law named Willie (Walter Matthau) convinces him to play up his pain to make a big pay day. Hinkle wants nothing to do with it until Willie dangles the possibility of him getting back with his ex-wife in this farce. I mentioned that I think the movie is a mixed bag and it really has this weird tug-of-war between brilliance and stupidity. Allow me to explain. On the positive side the movie not only has the kind of energy of Wilder's earlier  and of course features his razor-sharp sardonic wit. The biggest issue is oddly enough in the writing, something that Wilder and co-writer I.A.L Diamond  (Some Like It Hot, The Apartment) were legendary for.
The movie is pretty tone deaf when it comes to racial dynamics. In the movie an African-American football player named Luther 'Boom Boom' Jackson accidently  injuries Henry Hinkle (who as you recall is playing up his injury ala the insurance scam) and the man feels he needs to make it up to Hinkle by making his bed, cooking, cleaning etc. You can see why this was problematic at the time and very much so now. Worst of all, instead of using this to as a chance to be critical of race and stereotyping Wilder and Diamond never get anywhere close to this. This is sloppy considering both men literally were world renown for their expertly crafted screenplays.
The end result smacks of two-'wildly' out of touch screenwriters and director. As Joseph McBride (author and does a commentary -more on that later) says in his accompanying track that its, "Painful to watch". This is something that struck me the first time and always left a sour taste in my mouth. Also, the gold-digging Sandy (played brilliantly by Judi West) is a savage caricature even for Wilder. Poor characters aside the movies narrative is shaggy at times with a bloated over two-hour runtime. On the flip side the movie does feature some wonderfully plotted gags and, despite its issues you can still see a glimmer of genius (though its buried by a lot of crap). The other highlight is the of course the cast! Jack Lemmon and Walter Matthau made eleven films together and had a palpable chemistry together. They were every bit of an iconic duo like Lou and Abbott or Powell and Loy. Fortune Cookie is the first pairing and its nothing short of magic to see the two work off one another. Judi West does a lot with the rather ugly character and she is able to stand her own against Lemmon and Matthau. And of course Ron Rich who is great and like West does a lot with a badly written role. It's a shame Rich never went onto be a bigger star, only ever making a handful of other projects.
Billy Wilder was I think one of the greatest filmmakers of his generation. This is why it's kind of sad to see a sharp decline like The Fortune Cookie. When you crack this cookie open you cant help but enjoy its cast, its kitsch charms but sadly, its also tends to leave a stale and bitter after taste of regressive thinking and needless padding. Its hard to think even in '66 this was smart or even close to the same brilliance as their earlier work. To quote a line from a better Wilder/Diamond film, "Well, nobodies perfect."
Picture: I tried to find some info about this restoration but it seems to not be a 2k scan though I will say it, in my opinion looks like it. The image has a crisp sharp look to it and the black-and-white photography (by the brilliant Joseph LaShelle) is extremely well contrast and offers a uprising amount of depth. Details in sets, locales and costumes really are striking here. There are some artifacts and noise but nothing that is at all distracting from the overall great work here.
Sound: The Fortune Cookie has a DTS 2.0 track. Dialogue comes through nicely as does the sound and score. Overall a nice sound presentation.
Extras: Kino Studio Classics really provides some great extras. We get a new commentary by Joseph McBride. If you are going to get anyone to do a commentary by Wilder it has to be McBride who has written about, interviewed and watched Wilder at work. The historian does a great job at navigating the film its high points and lows. It was really a great and engaging track. Excellent work and well researched.
Call for Extras: Jack Lemmon Asks for the Good People of Cleveland to Show up at Municipal Stadium (59sec) a very short commercial Lemmon did for extras for the opening scene in Fortune Cookie.
Tribute to I.A.L Diamond (2mins) A vintage and short featurette on Diamond w/vintage clips.
Scene Work with Jack Lemmon and Walter Matthau (3mins) A interesting short sketch between the two iconic actors and Wilder.
Finally rounding out the features is a fav of mine, a Trailers from Hell w/Chris Wilkinson (2mins)
also includes a the regular trailer for this film and other Kino re-releases.
Posted by The Video Attic at 11:10 AM