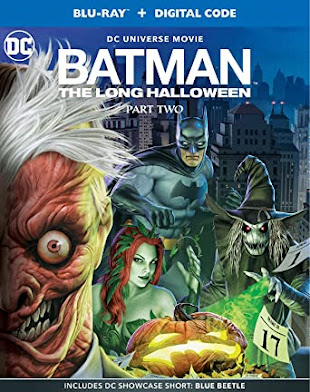 Plot Summary: The mysterious killer known as Holiday continues to hunt down and brutally kill members of the  Falcone crime family in Gotham City. To make matters worse a host of villains are unleashed onto the city. Through detective work Batman fears that a former ally might be the killer in this final second installment.

I think I can say that without a doubt that, in my humble opinion, Batman: The Long Halloween, Part 1 is the best DCAU ever, outside of Mask of the Phantasm. Everything was on point from the writing of Tim Sheridan, the direction of Chris Palmer and of course the excellent voice acting. But, best of all, I love how the creative team stuck incredibly faithful to the original source material. After all, The Long Halloween is one of the most seminal Batman stories ever told. I also like how it was decided to split these into two parts and to not rush or overly condense the story.

But of course, you’re here to find out the burning question: how is the second part? Well, it’s all treats and no trick for the second and final installment in The Long Halloween. Like part 1, the second installment sticks pretty close to the source material. It being the same creative team and done back-to-back, it feels like a very natural, seamless second and final part. The action is extremely well done, and the Sheridan does a great job at mining the material for satisfying character development. It's a tricky thing to balance, crowd-pleasing action and emotional weight, but I think Long Halloween does a great job at it. Also present is the dry-sardonic humor that made the first part such a wicked delight.

Like the first part, the animation is top-notch. Not only does the film wonderfully match the original visuals of the graphic novel, it also sticks with the DCAU’s house style. The voice acting is again fantastic, and I think Wes Gleason, the voice director, deserves a special mention because he really is key to just how seamless the performances are. The core cast returns and is joined by Katee Sackhoff, John DiMaggio, Zach Callison just to name a few. For a very long time, Batman fans have been waiting for a faithful adaptation of what is considered by most to be one of the greatest stories in the Dark Knight’s history. Thankfully, this is exactly what we got. Chris Palmer and Tim Sheridan stay true to the graphic novel while also streamlining aspects for the film’s sake. In my opinion, Batman: The Long Halloween, Part 2 is nearly perfect and well worth seeking out.

Picture: Like the first one, Long Halloween, Part 2 really looks great on 1080p. The animation is crisp, clear and really do pop in the HD medium. It's not surprisingly, as I said the first film has a fantastic art direction. Obviously, this movie was meant and made for 1080p and fans will be pleased.
Sound: Like the visuals, the sound is great! This, being a Batman outing has a lot of great sound effects and design and makes the most from its DTS 5.1 track. Extremely well done.
Extras: Batman extras include:
DC Showcase – Blue Beetle (New Animated Short) – Sufferin' Scarabs!, DC Universe Movies Flashback, Batman: The Dark Knight Returns, Part 2, Batman: Hush
From the DC Vault, Batman: The Animated Series – "Two-Face, Part 1", Batman: The Animated Series – "Two-Face, Part 2"
Posted by The Video Attic at 7:45 AM