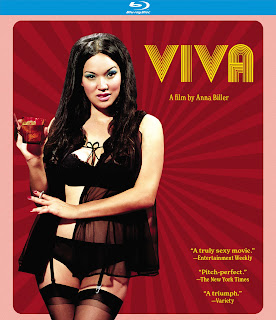 I have to say that I, like a lot of people came to Anna Biller's work with her brilliant The Love Witch (2016). Sadly, we have not had a follow up to her second feature. But, in the meantime fans can now buy her first feature film on HD thanks to Kino Lorber. I have actually never seen 2007's Viva which was her first feature length film (nor her short films) so this was actually quite a treat. Viva tells the story of two bored housewives Barbie later known as Viva (Anna Biller) and Shelia (Bridget Brno) who explore their sexuality in early '70s Los Angeles.
Anna Biller is an artist that is known for her ability to completely not only understand a time period in cinema but also to expertly distill it into a new creation. Here we get some Russ Myers, Doris Wishman and a splash of early Ken Russell all mixed into a candy-coated cocktail. The one thing you will absolutely know from a Biller films is that she adores the '60s-'70s era, exploring sexuality specifically in women and that her movies are visual fests for the eyes. I am going to say something that sounds like a diss but is not in any way- Anna Biller is style-over-substance- but when the style is this gorgeous you cannot help but be utterly transfixed.
Biller is a master at making a satire that is so spot on that it is dangerously close to the real thing. Here we get pure sexploitation, '70s drug-films, nudie cuties, nudist camp films and the plot from what feels like a highly stylized hardcore films. Even the acting seems tailor made towards the kind of films this movie is paying homage. You notice that I say homage and not parody because I think that while yes there is very much a self-aware humor to the film it never feels like its mocking them. It feels more like a bare-breasted celebration of female empowerment with Biller acting as writer, director and star but also is credited (but not limited to) the films incredibly production design, costumes and editing. Hell, she even did the animation sequence. I think that this is one case of a purely singular vision that, for the most part, works really well.  The production looks exactly like a retro film even with at times scratches in the film and colors that really pop.
If I had to lobby a compliant I would say that, as much as I think Viva is fantastic it does tend to go on a bit too long.  Some subplots don't feel like they go anywhere and I think that instead of adding a second housewife into the mix it should have been solely Viva's story. I had a similar problem with The Love Witch. Despite that I was just truly spellbound by just how spot on of an homage to late '60s-early-'70s exploitation.
Viva is a  '70s homage cocktail that sizzles with wit and overflowing with brilliant visuals and direction from Anna Biller.
Picture: Viva is the kind of movie that DEMANDS to be on 1080p and wow, this looks great! The colors really pop and thankfully the slightly rough film quality is kept. I wonder if Biller supervised this restoration because I think that the look with bright hues looks just like a film from this era. Its stunning.
Sound: Viva is equally pleasing with its audio. This has a 2.0 track but a full robust sound that really does pack a nice punch. Front heavy channel but still feels like it has a complex sound presentation in my opinion.
Extras: I was happy to see that Anna Biller was involved in this home video release. Here we get a brand-new commentary from her. It was really engaging to hear her talk about the film and the production. Also included is Behind the Scenes Footage w/commentary by Anna Biller, rounding out the features is a trailer.
Posted by The Video Attic at 8:03 AM