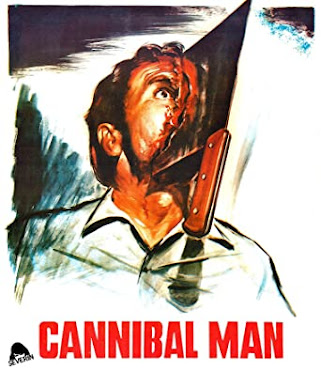 Disclaimer: Severin Films has provided me with a copy of this film free of charge for the purposes of review. All opinions contained within are my own honest reflections.
Eloy de la Iglesia's 1972 The Cannibal Man is actually a movie I not only have seen before but liked it enough to put it in my film guide The Ultimate Guide to Strange Cinema. This is why when Severin announced that they were going to be unleashing this movie on 1080p I was pretty damned excited. As I mentioned in my original review, the title is actually pretty misleading. In fact, Cannibal Man was the US release title- the original The Week of the Killer I feel is a more apt title. A lower-class working man named Marcos (Vincent Parra) accidentally kills a taxi cab driver whilst out on a date with his girlfriend. This has a kind of domino effect as Marcos now must keep killing to cover up the original murder.
So, despite this not really being about a cannibal, this isn't to suggest that the movie isn't deeply disturbing. The film is first and foremost a psychological thriller and it I think does a good job at putting you into the mindset of the titular killer. It does this in a couple of ways, the main one being that our POV and main character is the killer. The kill scenes are up close, intimate and actually pretty disturbing. Moreover, director Eloy de la Iglesias film has this grimy, hot and oppressive feeling that covers and coats every square inch. There is also a lot of interesting stuff going on and the movie has been seen as a sociopolitical satire on the Franco regime. Indeed, there is a lot about class struggle and the government favoring the wealthy that is, by no means subtle but I think it adds a interesting layer to the film. There is also this odd sexual tension between Marcos and his upper class neighbor.
Cannibal Man might not quite be the gut munching flick you were expecting but, I think it actually is still a great, grimy little film that has a lot to say about politics and class struggle. Thankfully, I never get the feeling like the movie is preaching but just helps to add a layer to the film.
Cannibal Man is a tasty treat that is equal parts sick and disturbing but also has a lot of interesting things to say. Not to be missed!
Picture: Severin really does a great job with the new print of Cannibal Man. When compared to the previous Anchor Bay DVD this movie has a noticeable uptick in brightness and the color is maintained really well. This movie isnt exactly a bright cheerful movie but the hues do pop. Night scenes are greatly improved from previous home video releases. The film does have some scratches and artifacts but nothing that remotely detracts from the overall product. A really great job.
Sound: Cannibal Man has a DTS 2.0 track. Dialogue comes through nice and clear.. It also includes the original Spanish track or English dub. English subtitles are included.
Extras: Cinema at the Margins (26mins) A really interesting deep dive in Spanish genre cinema. Includes great interviews with author/historian Dr. Shelagh Rowan-Legg and Stephen Thrower,
The Director and the Cannibal Man (17mins) Interview with historian and Co-authior of Conocer A Eloy Del la Iglesia. Also includes trailer and Deleted Scenes
Posted by The Video Attic at 9:39 AM