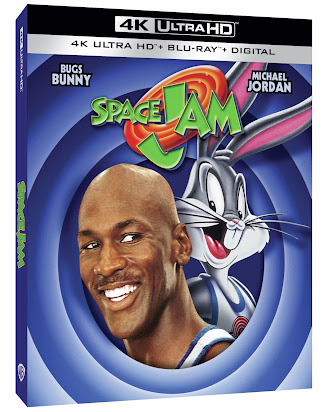 Just in time for Space Jam 2 (2021) comes the original late '90s cult-classic.
For those of you living under a rock Space Jam (1996) is a live-action/animated hybrid movie starring Michael Jordan and a host of other NBA stars. The movie, which was made on a hefty 80 million dollar budget (big for the '90s) was a blockbuster racking in over two-hundred million at the box office not including merchandise and home video sales. It was a shocker that it took this long to get a sequel, which of course came in the form of Space Jam: A New Legacy (2021). Just in time for the new film Warner Bros. Entertainment has upgraded the '90s film for older and new audiences alike.

I was a big fan of this movie when it first came out and I recall the VHS tape was firmly in regular rotation for a long time. I was completely bowled over by the blending of CGI animation and live-action. Though, Who Framed Roger Rabbit? (1988) did it first and in my opinion is the overall better film. Indeed, in the age of the Internet it has been interesting to see how the original Space Jam has been re-appraised as a movie that was fun as a kid but didn't quite hold up as an adult (which is the case for a lot of beloved media from our youth regardless of decade).

So, it was really interesting when I finally sat down to watch this UHD edition. I certainly can see the film's plot holes and awkward structure and at times clunky and at times cringe-worthy dialogue. It has some elements that feel wholly dated like Jordan's strange flirtation with pro-baseball. For me though, this '90s nostalgia is actually part of the films overall charm. Not to mention I think that the animation for the most part really holds up well all these years later.  And I think its safe to say that the new film's animation is even better looking.

Overall, I think this holds up as a fun film but I also can see where the movie is riddled with some plotting issues.

Picture: Space Jam comes by way of a new-UHD transfer. One thing you will notice right away is the film contrast is on the high side. This is no doubt due to having to contend with the animation portions of the film. I honestly wasn't that bothered by this and the overall film retains a lot of detail and clarity in things like sets, costumes and of course the animation really pops. The fully animated sequences really have a lush, rich look to them. I think maybe the could have made it have a warmer contrast to give it more depth. But, overall its a great job and, in my opinion a big step up over the previous Blu Ray release.

Sound: Space Jam has a fantastic Dolby TrueHD track. Much like the video presentation, the sound is a much needed upgrade. Jam offers up a robust, huge sound and makes the most of the sound design, score and sound effects that make up the heart of this film. In my opinion this movie never sounded better and the speaker range is near-perfect.

Extras:  On the UHD A commentary track by Bugs Bunny, Daffy Duck and director Joe Pytka. This amusing and informative track which has been ported over from the previous release.

On the Blu Ray Extras Include: the featurette Jammin' with Bugs Bunny and Michael Jordan, 2 Music Videos: Seal's Fly like an Eagle" and the Casts Monsters Anthem Hit 'Em High, rounding out the features is a theatrical trailer.