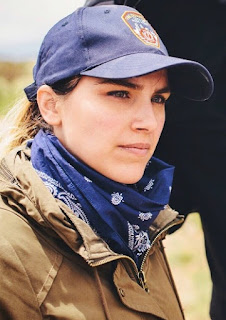 Writer, director Natasha Kermani is not a household name yet, but, has been working in cinema for since the late '00's.  2020's Lucky is her third feature film which I enjoyed a lot. My Review for Lucky HERE
The extremely talented Kermani took time out of her business schedule to talk about her latest film.
TVA: I read in an interview that you originally were drawn to the script that was sent to you. How much, if any did you change from that initial draft?
NK: Not much really. The script was almost exactly as it came to me. When definitely made a few small tweaks. The biggest thing I would thing that changed was the main character a young child, a son in that initial draft and we chose to take him out. We did this for a variety of reasons but mostly because I felt like he wasn't necessary. He was just there to make the main character more sympatric, but also logistically it helped us a lot. (laughs) Not only is it more difficult having a young actor on set with us on our very fast shoot schedule but I think beyond that its a little more interesting to let this character sort of be an unusual lead and to sort of just be who she is fighting for herself. I think that ended up being a really good adjustment that we made. Other than that really its all just in the script and we just sort of took what was in there and then built on it and made it crazier (laughs), and more expressionistic with a lot of the production design and the props. I would say overall its pretty much exactly like the version that I read.
TVA: Now, there is a scene in the movie which deals with the character May's book publisher where he basically tells her to basically lean into the woman issues for sales. So, I was wondering if it's fair to say this movie examines marketable feminism?
NK: Absolutely. I mean, Brea even speaks about why she decided to make her a self-help author. It's sort of that idea of what she calls, "business-lady-feminism"
(both laughs)
which is sort of this like '90s era sort of feminism that we grew up with which is this idea of, "you can have it all, you can have a business and you can do whatever you want and you can go it alone, all you need is yourself." And, I think what gets lost in that message is the idea of community and communication. A lot of the weaknesses that May has as a character is tied into that idea of, I think you said it in a great way, marketable feminism (laughs). Rather than really going down to the root of what she needs which is to connect with other women and herself in order to escape this nightmare. So yes, its absolutely all tied together and I think its Brea's initial intention with the character.
TVA: What I love about Lucky is it feels like the kind of high concept genre you would see presented in the classic Twilight Zone series.
NK: Exactly! That's what we kept saying, that it should feel like a Twilight Zone episode. Like your going into the Twilight Zone (laughs). I love that you got that, that was exactly the intention.
TVA: What has the audiences response been since the film's release?
NK: Yeah its been really interesting. I think the number one thing for us that's been great has just been really hearing people, mostly women say, "Yes, this is my experience reflected on screen". I think there are...not grateful but excited to see representation of not just, "Oh this horrible traumatic experience happened" which is I think what a lot of horror films delve into but here its a more nuanced side of it that gets into the absurdity of what it is to be a woman (laughs) in this world. It can be really ridiculous and absurd and so I think that has been probably the number one response and we love hearing from peoples perspective on it. Also just, if that person is with a partner that is a man and being able to have a conversation with their partner and maybe they didn't realize that that was something they had experienced which reflected as aspect of their own lives. And of course there is some resistance to the material. I think that just goes hand-in-hand when you have a movie like this with a very strong point of view (laughs) but we welcome it.
TVA: The movie kind of reminded me a little vibe wise of She Dies Tomorrow.
NK: Yes. Both apart of the disastrous South by Southwest but absolutely, same vibe.
TVA: What do you want audience members to leave Lucky with after the credits roll?
NK: I hope its an overall different experience for them. I hope that it's slightly to the left maybe of what they were expecting or if they weren't expecting anything (laughs) then maybe it gave them something different. I think that we were really interested in, like a Twilight Zone in the way it would tackle things from an interesting point of view. That was definitely important for us so I hope people enjoy it on that level but more importantly they are ab;le to open up deeper and more nuanced conversations about the experience of women in this world, but also how it might change and should change. Sort of this larger conversation you can have over serval glasses of wine (laughs) after seeing the movie, thats intention.
For More Interviews: Josh Ruben Click HERE
Interview Source: https://seventh-row.com/2020/09/09/natasha-kermani-and-brea-grant-on-the-horror-of-daily-misogyny-in-lucky/
Posted by The Video Attic at 7:56 AM