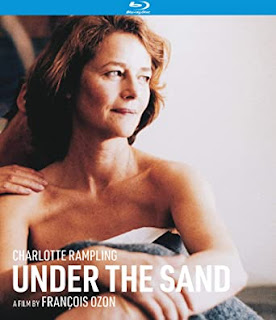 I recently saw my first François Ozon film earlier this month with Summer of 85' for Geek Vibes Nation (Review HERE) and, I had the pleasure of reviewing Under the Sand (2000) an earlier film from Ozon. Marie (Charlotte Rampling) is on a relaxing vacation with her husband when he goes missing. Left without any kind of closure she must pick up the pieces of her life. She soon starts seeing another man but the void left from her previous husband and the mystery around his disappearance keeps eating away at her.
Under the Sand is certainly a slow moving film but one that has a lot merit. Ozon does a fantastic job at crafting a realistic meditation on what it means to love, to lose and to try an pick up the pieces when tragedy strikes. It firmly and squarely places you in the Marie's shoe's and what we get is a heartbreaking journey into the soul. François Ozon isn't afraid to tackle heavy topics like grief but, done in an engrossing and interesting way. I think that if you are expecting a thriller type mystery, you might be disappointed. Sand isn't interested so much on the why so much as the emotional shrapnel a trauma like this leaves embedded.  I think its one of those movies that despite being praised by critics, it doesn't seem to get the love and attention it deserves.
Charlotte Rampling gives what I consider an Oscar worthy performance as Marie. The entire emotional core rests on her shoulders and she of course pulls it off beautifully.
Under the Sand isn't a big lavish or even set-piece heavy film yet, it's a moving exploration into heart break, love, sex and what it means to be deeply human.
Picture: Under the Sand turns twenty-one this year and and makes its US HD debut and, I'm happy to report the film looks great in 1080p. The film has been cleaned of any artifacts and scratches and what we are left with is a pristine looking image. Darker lit scenes especially impress in this transfer. Skin tones overall have a natural, even warm tone and grain is present but not chunky. There is some slight blurring and slight ghosting but nothing that distracts overall.
Sound: Under the Sand has a DTS 2.0 track. Dialogue comes through nicely, as does the score and sound design.
Extras: Under the Sand includes two commentaries: One by director François Ozon, the second by film critic and author Kat Ellinger. Both commentaries offer great insight into the films themes, motifs, actors and production. Also included is a interview with actor Charlotte Rampling and trailers.
Posted by The Video Attic at 9:24 AM