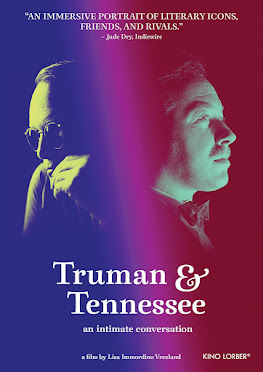 If you were to name two of the biggest writers in the latter part of the 20th century Truman Capote and Tennessee Williams would have to be at the very top of the list. Not surprisingly, both gay men became fast friends and friendly rivals. Director Lisa Immordino Vreeland takes a deep dive into the lives of both men and their respective works as well as their friendship. Using archival footage from interviews from Capote and Williams along with beautifully done narration (based on writings) provided by Zachary Quinto and Jim Parson.

If ever there was a documentary that felt tailor made for me it would be 2020's Truman & Tennessee. Through this documentary Vreeland gives the feeling of magically transports the audience back in time to a smoky party with both Truman and Williams regaling you with stories. And, of course  you cannot help but hang for dear life on their every single word. Vreeland does a fantastic job at laying the groundwork for both writers and also the incredible bond they had with one another. I also have to give HUGE props for casting two openly gay men voicing two openly gay writers. This idea of casting gay actors in gay roles is sadly not the norm like it should be but, I think we are getting to that point. Parson and Quinto completely disappear with their voice roles and they truly make this documentary come to vivid life.

The movie features great interview clips, clips from films based Truman/Williams respective film adaptations as well as of course the voice-over narrations. Vreeland also does a great job at counterbalancing perspectives on various subjects like love, work and friendship etc. Of course they also get into the iconic films based on their work.

If you are already a fan of the two author/playwrights works or just newly discovering them, this is a incredibly worth while documentary to watch-hell, its worth even owning in my opinion.

Picture/Sound: The majority of the film is clips which is of course in 720p and therefore looks pretty rough. This isn't a movie that really needs to be in HD to be completely honest and looks good enough to serve its purpose. The sound is also good with a 2.0 and a 5.1 track. Dialogue, voice-over and score comes through extremely well.