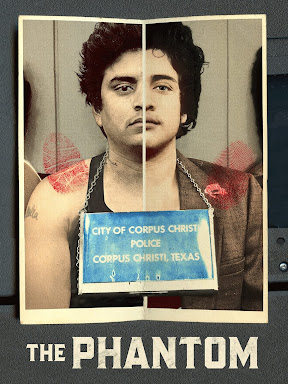 In this Southern fried-true crime outing filmmaker Patrick Forbes examines the brutal murder of a store clerk named Wanda Lopez who is killed whilst on the phone with 9-11. What seems like a pretty cut and dry case of murder leans to questions, possible corruption and plenty of twists and turns in this highly engrossing documentary.
So, I am a huge fan of true crime documentaries, especially ones that don't get covered. Such is the case with The Phantom, which has plenty of strange aspects to it. I will want to warn viewers from the outset that if you are easily upset or disturbed you may want to opt out of this one. I say this because The Phantom plays portions of the infamous 9-11 call which has the final cries and agony of the victim Wanda Lopez.  If I'm being honest its upsetting but they wisely don't linger on it but its worth mentioning.
Forbes does a fairly good job at laying out the story and slowly unfolding how the case was shoddy at best and how a shadow of doubt on Carolos DeLuna starts creeping in. The director tries to weave into the narrative a bigger thread about the Texas court system but thankfully this doesn't over take or de-rail the overall story which is interesting enough on its own.  I will say as good as the documentary is it takes a little while before I was fully gripped and engaged. When it does though I think that Forbes presents things in a very clear way and the interview subjects along with the editing does a great job telling the overall narrative. There are aspects of the case that I think could have been presented in more detail and I think it would have been nice if they focused a little more on the victim Wanda Lopez.
The Phantom is a flawed but pretty fascinating true crime documentary which is worth checking out!
Picture/Sound: The Phantom was shot on digital and therefore looks pretty decent even on a low-def. There are of course some shots that clearly show the kind of limitations even with using higher quality cameras as it looks blurry and not well defined. Overall though its actually pretty good looking. Sound wise its the same, with dialogue coming through nice and clear.
Extras: None
Posted by The Video Attic at 7:20 AM