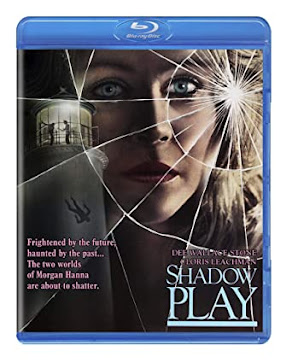 Writer/Director Susan Shadburne never became a household name, mostly working in direct-to-video children's romps. Shadow Play (1986) also known as Ghostwriter seems to be an outliner in her short career. A playwright named Morgan Hanna (Dee Wallace) is still dealing with the death of her fiancé Jeremy (Barry Laws) whilst also trying to get past her writers block. To unblock she decides to get away and stay at his fiancé's mother Millies (Cloris Leachman) beautiful sea side homestead. Soon she starts to get a feeling that Jeremy is still with her-in spirit anyways.

So...I really love the set-up of Shadow Play. Being a writer (and we all get writers block) I found it pretty instantly relatable plus writers going a little bonkers makes for time tested but true horror fodder. Just ask Jack Torrance. Sadly though the movie plays less like The Shining (1980) and more like a ultra-cheesy Lifetime movie. The film lumbers along and is pretty uneventful for most of its scant 97-mintue runtime. You can certainly see how Shadburne is out of her element as the movie is frankly dull with what feels like strong emotional cores but the writing and acting isn't nearly effective enough to drive it home. I honestly knew I was suppose to feel emotionally invested in the characters best I wasn't and I chock that up to a failing by the filmmakers. And as much as I love Dee Wallace she gives a uneven performance. I don't completely fault her because she is good in other films so again, I think it was a combo of a unexperienced director and clunky dialogue. Even Oscar winning actor Cloris Leachman is not bad but not nearly as good as she has been in other films.

It's a shame because this a great cast that is utterly wasted on what feels like a made-for-tv melodrama. Shadow Play tries its hardest to be moody but again, this just comes off silly and like the worst kind of soap-opera offering.  I think there is roots of a good story here but its sunk by a screenplay that is watered down, cliched and cheesy and not in a fun way.

Picture: Shadow Play has a new 2k transfer. The movie looks overall pretty good with a nice uptick in clarity and brightness. Grain is smoothed out and not chunky which is always welcomed, especially for transfers of titles thirty-plus years old. There are some artifacts and scratches but this is only noticeable in a few scenes.

Sound: Shadow Play has a DTS 2.0 track. Dialogue, score and sound design come through strongly. I will say that there is some unwanted background noise present but nothing that is distracting.