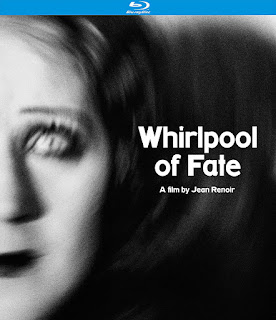 For those who are new to French cinema, Jean Renoir is a world renowned director that crafted some highly regarded works of cinema. Kino Classics has provided film fans and newcomers to the directors first film Whirlpool of Fate (1925) as well as he second feature Nana (1926), the latter of which also coming out July 20th (look for my review this week). Virginia (Catherine Hessling) is living a fairly innocent and carefree life until tragic death of her father. To make matters worse her uncle drinks away all the money leaving the family in a bad way. The young girl fights to survive and ends up the victim of mistaken identity in this strange first film by Jean Renoir.
Whirlpool of Fate is a debut that features a lot of themes and flourishes that the French filmmaker would be known for. Visually the movie is wonderful and uses a lot of techniques that may feel standard but was groundbreaking for the time. Renoir has a way of distorting images to give them a haunting and just unsettling nature. Fate also uses nature locales to give the movie a richer sense of production and realism. As for the narrative itself, its fairly good and at a brisk 83 minutes Jean tells a deeply emotional and ultimately off-beat tell of love, lose, classism and trying to belong. Its these universal themes the movie taps into that makes it hold up. I will say that there is some side-story that could easily have been trimmed. This is only a few spots where you can tell this is a first effort.
Anyone new to Renoir or firm fans should consider this a must-watch. Not only is it a very good film but its an important one being the directors first.
Picture: Whirlpool of Fate features a brand-new 4k transfer. This early Renoir film which is almost one-hundred years old is simply put a stunning restoration. Artifacts and scratches arent totally gone but have been cleaned to a considerable degree. And, the end result is a picture that hasn't been this good looking since the film came out in the mid '20s. Kino has also taken pains to present an image that doesn't have flicker issues and it maintains a constant black-and-white temperature. Black-and-white contrast is also really well done and thankfully the image isn't overtly bright where it feels washed out.
Sound: Fate removes any crackle, or unwanted background noise in lull of a nice and lively score by Antonio Cappola.
Extras: Film critic Nick Pinkerton provides an insightful and interesting commentary. Pinkerton is well researched and I was really engaged.
Posted by The Video Attic at 12:50 PM