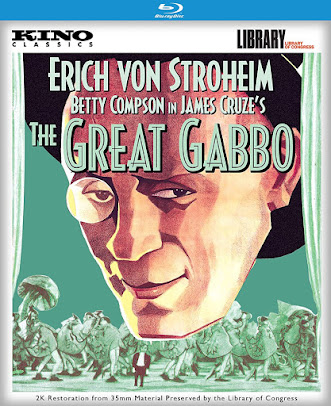 For those you wondering the color scene "The Ga Ga Bird" is sadly still missing and is most likely lost to time.
A hot tempered performer named The Great Gabbo (Erich von Stroheim) who does a ventriloquist act with a dummy named Otto in a low rent theater. His assistant and love interest Mary (Betty Compson) takes the brunt of his anger and criticisms. She ends up living the act but, before she goes professes that she loves Otto as she believes its the only humane and soulful part of Gabbo. Soon Gabbo and Otto take New York and find a success.  But is Otto actually alive? What ensues is a strange romance in this early talkie musical.
So, dummies are horrifying. Especially Otto in this early talking film. The fact that this isn't a horror movie feels a bit like a missed opportunity. Similar films like Dead of Night (1945) and later films like Devil Doll (1964), Magic (1978) would take the Gabbo blue print and actually use the creepiness of the dummy to added effect. Here though, this is meant to be a romantic film and, its really something. The movie is famous for being an early example of the movie-musical with what is called diegetic music or music that is actually happening in the universe of the film. The movie is fun if you like grand-musical performances and find cheesy vaudeville acts charming. If i's being honest the romance feels underwhelming and takes a long time to form and cement over the course of its hour-and-thirty-six minute runtime.
Again, I feel like it would have been great if the filmmakers would have leaned into the uncanny valley-ness of the premise. It's just a more natural fit in my opinion. You can also tell this is an early talkie as it doesn't have a traditional musical score. This wouldn't really be fully taken advantage until the mid-30's. Gabbo is rough around the edges and feels like it lacks a compelling enough narrative weaved within the fun-musical numbers. Still think its a pretty interesting oddity that closed out the '20's. "Caught in the Web of Love" is maybe one of the strangest earnest musical numbers I ever seen captured on film. You can certainly see its DNA in other early musicals as well as weirdly morphing into a much loved horror subgenre. Otto sassed so Fats could kill.
Picture: According to Kino The Great Gabbo was restored in 2k by the Library of Congress using the original 35mm elements. The film, which is nearly one-hundred years old looks great overall. The black-and-white is well balanced contrast wise and you cannot help but be impressed by the level of detail and clarity. The transfer still has a few issues like temp. flickering and some artifacts. I actually didn't think it was distracting in any way and, I also have to consider what this film looked like before restoration and what condition the elements were in.
Sound: Gabbo has a DTS 2.0 track. I was happy to hear or, rather not hear any unwanted background noise which can be an issue with older films. Dialogue and musical numbers
Extras: Includes a commentary by musical historian and author Richard Barrios.
Posted by The Video Attic at 9:14 AM