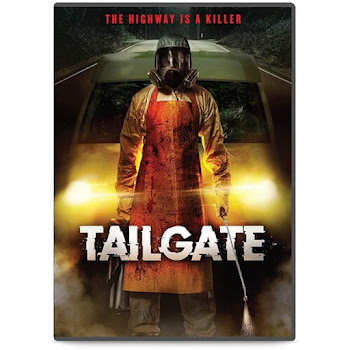 2019's Tailgate (which was distributed in 2021) has the kind of cover art that feels like something you would get in a dollar-bin at your local warehouse store. And, its probably something I would have avoided altogether because my pile of movies to watch for review and pleasure purposes feels like a mile high. What peaked my interest is that Film Movement put it out and they rarely do fringe-cinema releases, especially horror. I also learned that despite the American title Tailgate the movie is actually called Bumperkleef and made in the Netherlands. It's worth noting that aside from the re-title this movie is also dubbed-and badly at that. A serial killer is out on the highway targets a family and thats basically it.
The movie starts off actually really strong with a cold open that sets a nice tone that is darkly humorous but icy cold. Sadly though, the movie never really lives up to its first few minutes. What the audience gets straddled with is a killer that lacks mystic and its already paper thin premise is stretched thin. The fact that the prime targets is cis-white upper-middle class family is utterly boring and feels like lazy writing shorthand for upping the tension. Moreover, while the acting is solid the characters are annoying and following a fighting middle-aged couple and their whining brats is about as grating as it sounds. I think that the movie could have actually set up this theme of a man who feels trapped, maybe even emasculated and this boils over into road rage might have added depth and layers to the story but this movie doesn't go that deep.
If the movie was more interesting or subverted expectations I could easily forgive shallow characters and even a pretty paper thin plot. Tailgate or Bumperkleef doesn't offer anything new or exciting  to the whole 'road-rage' genre. A great example of this is actually 2020's Unhinged which didn't have a lot of depth but was a purely satisfyingly angry and grimy movie that felt like it was partly in on how over-the-top and campy it was. Hell, it felt like it said, "Fuck it, lets embrace it". This movie on the other hand is deadly serious, lacks an interesting hook or story and the things only start to really get going a good hour into the 85min runtime. I will say that what is frustrating is the director clearing is decent, the movie is actually well shot and, as I said the acting is actually good. It's just the movie isn't remarkable, nor is it so over-the-top it crosses into the 'so-bad-its-enjoyable' realm.
I actually think this would have worked so much better as short film rather than a stretched out feature film.  Just watched Unhinged instead.
Picture/Sound: One of the shames about this is visually the movie has a lot going for it. Putting it out on 720p (which is a red flag that FM didn't feel like this was worth the 1080p format) does a big disservice. Outdoor scenes are still pretty lush looking but of course doesn't have the sharp definition. Sound fares a bit better with a nice 5.1 track. Sound design is robust and full overall.
Extras: None
.
Posted by The Video Attic at 10:57 AM